In the 62nd in a series of posts on 2014 books entered for The Story Prize, Eliza Robertson, author of Wallflowers (Bloomsbury), considers alternative careers. 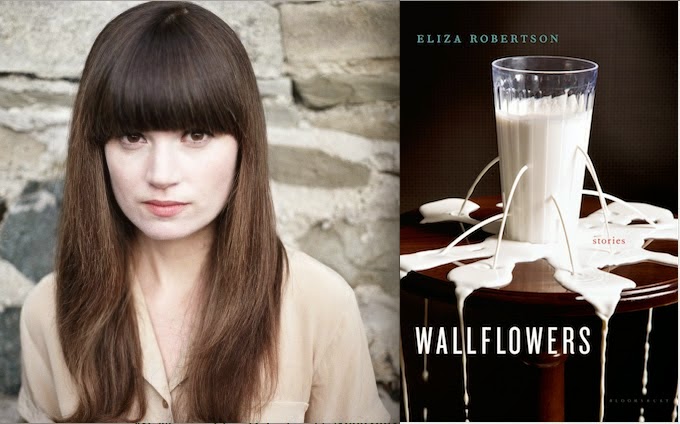 If you weren’t a writer, what would you be doing?
I have three answers for this question, or rather, I will interpret this question in three different ways.

Interpretation #1: If I died tomorrow and could be reincarnated as another human being, what would I be? Answer: a dancer. I have danced recreationally for twelve years, but it’s not the same. I missed the back-bending, foot-breaking golden years, and I am not sure I have a natural talent for it anyway. I was born pigeon-toed, which is the opposite of what you want.

Interpretation #2: If at 20 I did not join the University of Victoria’s creative writing program, what would I be? Answer: A lawyer. I studied political science for the first three years of my undergraduate with the hopes of writing the LSAT and going to law school.

Interpretation #3: If right now I did not write what would I be doing? This might be the nearest to the original question. Answer: I would work in a fun open-plan office with bowls of candy and bean bag chairs and walls you could write ideas on. I don’t know what the company would be, but it would involve an OK salary, witty coworkers and benefits, I hope. (Really — I would like this anyway, even as a full-time-ish writer.) OR I would work in film production. I don’t know what I would do in film production, but I feel at home on set, and I think I would like to speak into a headset or walkie talkie.

Describe an unusual writing habit of yours.
It has come to my attention that I rock from side to side. The first time I noticed, I was working at the beautiful Bibliothèque d’Etude et du Patrimoine in Toulouse, where I lived at the time. I suppose we are hyperaware of our behaviour in public spaces, because only then did I realize that I was shifting back and forth on the chair. I stopped. I didn’t want the French to think I was a psycho. The next day I caught myself rocking at home and did not stop. I figure it helps maintain a prose rhythm.

Do you ever borrow characters or situations from real life, and has anyone ever confronted you about it, been angry or pleased?
Normally I do not borrow characters from real life, except once I wrote about a hostile housemate. The story itself is not autobiographical, but certainly I recycled some of her mannerisms. She has not confronted me about it. It wouldn’t be the worst thing. I portrayed her sympathetically in the end, I think.

What's the best story idea you've had that you've never been able to write to your satisfaction?

When I was in a second year workshop at UVic, I submitted a story about a sword swallower, which was written in the form of a how-to guide. (The title was “How to Swallow a Sword,” I think.) It was basically a dramatized eHow set at a circus with a snake charmer and lobster boy who made puns about sea life. Oh, and the narrator was incestuous and “sword swallowing” became a metaphor for seducing his niece. I tried to take on too much, I think.
Posted by The Story Prize at 12:33 PM