In the 66th in a series of posts on 2014 books entered for The Story Prize, D.W. Wilson, author of Once You Break a Knuckle (Bloomsbury), explores alternative careers. 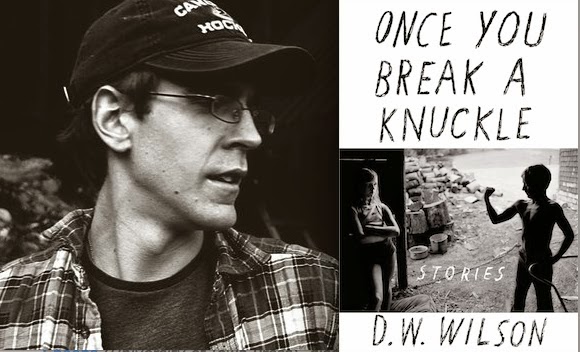 If you weren't a writer, what would you be doing?
I suppose in the best possible world where I wasn't writing, I would be a masked vigilante, not unlike Batman. It's in my blood: My old man's a (retired) Mountie and my grandfather was a town cop (so they say) and my sister works in the courts, and I had every intention of being a lawyer until about my third year in the University of Victoria's writing program, when after class one day my professor asked me if I'd applied to grad school yet.
– No, I said.
– You should, she said.
– Okay, I said, and did.
Or I'd be doing Judo professionally, though I'm not sure that pays any better, and I never had the discipline to maintain the Grecian-God physique required to stay competitive. More realistically, I could probably pull wire for cash or make bank in, like, Fort McMurray doing my part to wreck the globe, or other miscellaneous construction (I lay a mean parquet floor) or I could teach, though the inescapable truth is that I've now spent my formative skill-learning years doing one thing. (This)

Describe an unusual writing habit of yours.
Well. I sing. Not in public and not with any success (I am flatter than some well-leveled hardwood) but late at night with my headphones on (noise-cancelling; I can hear nothing) I will belt out the lyrics to whatever bad eighties rock song happens to be blaring in my ears. It's one part an energy thing, since I work so late at night and will take any boost I can get, but it's also a headspace thing. I need music to write effectively. Something to do with syllable counting, maybe, the arrangement of Latinate versus Germanic words. I dunno, it's mysterious to me, too. Something to do with maintaining a certain rhythm in my prose.

What's the worst idea for a story you've every had?
I suppose this depends on how you want to use the term “worst idea.” For instance: A few years ago I wrote an essay that is one part fascinating exegesis about voice in fiction and one part a verbatim recount of the first (not last) time my (now) wife declined to go on a date with me. I used her real name and for some reason a magazine published it. I think I had some grand plan that in the distant future when we were both middle aged and bored, I'd dust it off and show her and we'd have a good laugh and maybe rekindle our sex life, remembering how young and stupid we once were. Instead, she showed up by coincidence at the launch of the magazine that published it, so I took the only option available to me and necked five glasses of wine and spent the evening reciting the most embarrassing lines to her. You know, grab the dilemma by the horns and all that jazz. And now we're married! So perhaps there's a lesson there.

What advice do you have for aspiring writers?
Write constantly. Read deeply. Do your best not to despair but in moments of darkness know that every successful writer has shared that same darkness. As in all things, persistence beats resistance.
Posted by The Story Prize at 9:03 AM