In the 59th in a series of posts on 2013 books entered for The Story Prize, Carolyn Cooke, author of Amor and Psycho (Alfred A. Knopf), gives us a tour of her eccentric studio. 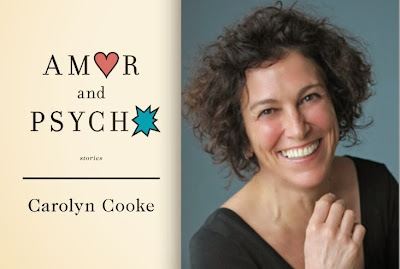 Where do you do most of your work?
I work in an uninsulated cabin that sits alone on a hill, not quite visible from my house, which is by almost any American standard also a cabin. The cabin that is not my house—call it my anti-house—has nine recycled windows and looks out over redwoods, tanoak, bullpines, and the ocean. A wooden ladder rises to a loft, which holds a futon covered with sheets that never need to be changed and an important pillow made from one of my husband’s old shirts and embroidered with the words “I Love You Mom,” which I keep as I might keep a deed in a safe deposit box, as proof. I sleep better and harder here than anywhere I’ve ever slept, and dream higher-quality dreams. 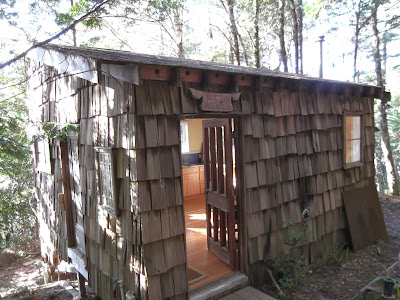 The anti-house is furnished with discards from my other life. The only precious object is an antique card table with a bit of inlay work at the front. My desk chair, straight-backed and Puritan, has a hole in the seat and wisps of horsehair coming out. There’s also a lounge chair with a pony hide that went through a fire (here, in 1999, my fault). Next to the chair sits a reading table containing a white metal lamp of the kind that cost $2 in the 1970s, two dictionaries, and four ivory elephants. The elephants—they used to be five—are the last things my Nana asked about before she died: “Have you lost my ivory elephants already?” with a kind of resignation I might one day remember to practice. There’s a mug containing the same red pencils my grandfather used to correct my letters to him and three wood-and glass cases containing rocks and birds’ eggs. A canvas guest chair bought at Conran’s in New York in 1980 threatens constantly to rip, but I don’t worry about that because I rarely have guests.

The cabin contains a minimum of everything (besides human company) I need to survive: hot plate, sink, coffee articles, cans of soup, and a jar of peanut butter bought from the co-op the year my daughter turned nine. There’s one fork, one spoon, a Buck knife, and a Ball jar. There’s a telephone, an olive-green typewriter bought in Hamburg, Germany, in 1991, a dog bed, and a dog.

The books here are those I wandered up the hill with—essays, novels, diaries and poetry: Woolf, Dostoevsky, Nabokov, Roth, Trevor, Joyce, Ellison, Davis, Munro, Paley, Jewett, Lahiri, Lopez, Gaitskill, Michaels, Chekhov, Sontag, Didion, Eliot, Glück, Robinson, Stevens, Whitman, and Yeats. There are letters of Flaubert and Bishop (this last a fat volume that went through the fire and smells strongly of ashes and pine) and also twenty or so binders of letters, notes, journals, and sketches, which I combine in an endless work called “The Cord” and pillage regularly.

My anti-house is a private shell, a container for things that seemed important enough to drag up the hill. Myself, for example. It contains the part of life I made out of nothing, out of sentences. When I make my way here and get to work, I leave myself for a while, forget what I am. Later I head down the hill blurry and disoriented, stumbling over pine roots.

Where does this obsession come from, to see life, to nail it down with words, essentially instead of living, or as a way of living? I have a friend who designed and built an art studio in one of the years it took me not to finish my second book. He dug holes, poured concrete, laid joists and beams, erected a shell, ran electric wire through the walls, hung sheet rock, painted and plumbed—while I constructed and tore down phrases. (Now he has an anti-house to face his demons in.)

The house I live in embraces what Roland Barthes has called “the spectacular pleasures of domestic life”: newspapers, Band-Aids, roast chickens, day lilies, brass polish, old address books, train sets, ski jackets, sheet sets, screw drivers, stamps, soaps, vitamins, constant wireless contact with the world and an evolving cast of people to whom I feel connected by ties of affection and duty. My anti-house says no to all that.
Posted by The Story Prize at 9:17 AM