Mary Akers Attends to the Details

In the 50th in a series of posts on 2013 books entered for The Story Prize, Mary Akers, author of Bones of an Inland Sea (Press 53), discusses layering, linkages, ontology, and sound. 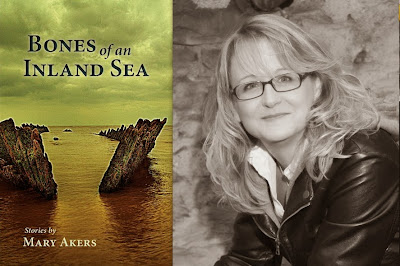 The first coherent draft of Bones of an Inland Sea contained nine stories related only by a repeating ocean theme. I called it my “marine ecology collection” but found that I wanted an even more cohesive book so I assigned those stories to three main characters. There was Jack, a Vietnam veteran working hard to live in a society that doesn’t value his unique approach to life; Leslie, a field biologist caught between the conflicting needs of her teenage children and her aging parents; and Dani, a transgendered man working to understand the legacy of his unusual lineage. I wrote five more stories to fill some critical gaps in the arc of the book and ended up with an interconnected family saga that spans two centuries, three oceans, and four seas.

As a painter might layer many colors to achieve one color (with a depth that could not otherwise be achieved), so, too, a writer works on many levels, including layers that readers will never see. And yet the layering informs the text, deepens the reader’s experience, and gives the writer a special thrill of pleasure. In “Like Snow, Only Grayer,” a young, newly single mother of two comes to the Marshall Islands for work. The present-time front story is interspersed with back-story about the U.S. atomic testing as it unfolded for the residents of Bikini Atoll in the 1950s. These past sections are told factually, supplying numbers, quantities, and dates. X-tons of explosive power, X-number of experimental animals at ground zero, X-many U.S. Navy boats anchored nearby to determine survivability. The numbers quickly become overwhelming, the facts institutionalizing. In the present story, the sections often end with terms that relate to jurisprudence: objection, defense, guilt, exhibit A. It was my goal to have these subtle details add up over the course of the story to create a mood and emotional connection that would not be possible simply by spelling out the horror and injustice.

Ontology is my new favorite word. Unfortunately, despite having looked it up repeatedly, I’m still not entirely sure what it means, but I’m going to throw it around as if I do. For my purposes here, ontological questions explore what it means to be human, and specifically what it is that makes us human and, even in a grand sense, the meaning of existence. Who or what can be said to exist? Humans? Animals? Does Truth exist? Beauty? Justice? Also, how much are we guided by instinct? How much by societal expectations? How do our bodies relate to our environments? All of these questions hovered in my mind as I shaped the book.

For inspiration, I drew on headlines from the news that wouldn’t let me go. I wrote my way toward understanding the thorny and the difficult. I have stories that hearken back to the Terri Schiavo case, the Asian tsunami, the pull of a charismatic cult leader, the great Pacific garbage patch, cetaceans in captivity, Post-Traumatic Stress Disorder, the fluidity of gender, personal identity, and more.

I am also interested in how my work sounds. In the reader’s head, I mean. The music of words is important, the flow of sentences equally so. Each word in a story gets followed by another, each sentence by the next. How the words and sentences interact informs how we perceive and experience the whole. Perhaps it’s my southern roots showing, but I do love a musical sentence. As I write this, a wonderful voice actor (Erin L Jones, narrator of more than 500 audio books for the blind) is putting the finishing touches on an audio version of Bones of an Inland Sea. It’s been wonderful to have an astute and talented reader bring to life the chains of words that first existed only in my head.
Posted by The Story Prize at 5:47 PM