Kelly Luce Takes a Hatchet to Her Work

In the 53rd in a series of posts on 2013 books entered for The Story Prize, Kelly Luce, author of Three Scenarios in Which Hana Sasaki Grows a Tail (A Strange Object), discusses what she calls "the chop-chop method." 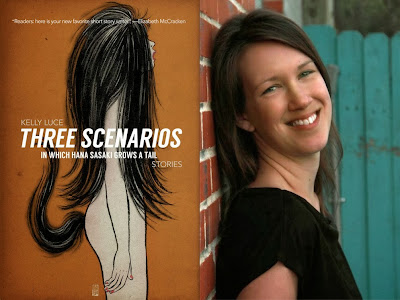 I love my laptop—we’re umbilically attached—and do most of my writing on it. But every tool has its disadvantages. There’s the temptation to revise as I go, or the curious phenomenon of the screen-sized paragraph. The thing that bugs me most is that when I’m working on a story, a computer doesn’t let me see the whole thing at once.

Stories are read from start to finish, but they aren’t always written that way. A discovery made while writing page 20 may really belong on page 2. Yet I can’t wrap my mind around this until I actually see it on page 2. This is why, along with a pen, notebook, and laptop, I carry a sharper tool in my writing arsenal: scissors.

I came upon the chop-chop method while I was working on “Wisher,” a story in Hana Sasaki in which a man can hear the wish made on a coin when he holds it. I’d written blobs of text about the man, his job, the fountain full of coins, but I couldn’t see what the blobs added up to. Maybe it was a stupid idea, not worth a whole story. Maybe the wish-hearing thing was a gimmick and that’s why the story was stuck. I printed out what I had and lay the pages on the kitchen table. The twelve of them mocked me. It’s so cute that you thought changing our font to Baskerville would help, the story taunted. I swear one page grew an arm and flipped me the bird.

I grabbed the shears from the knife block on the counter and started cutting the story up. First I cut between paragraphs, then between sentences and even halves of sentences. I sliced the thing into its smallest possible units. Then I looked at those narrative atoms like pieces of a puzzle. I can’t always finish stories, but a puzzle, I can do. I messed around a bit. Putting the first third of page 14 between the last sentence on page 5 and the middle paragraph of page 8 sparked something. Gaps showed themselves. It became obvious that a few pieces that had seemed to fit at first were not pieces of the puzzle at all. I threw them out. (OK, I set them aside neatly, just in case.)

I read in Susan Tepper’s post that Billy Collins organized his first book by taking the poems and throwing them in the air; their order when he picked them up was the order of the book. I’m advocating for a slightly more controlled version of this, but it can’t hurt to see what notes chaos, or a pair of kitchen shears, might have for a story.
Posted by The Story Prize at 6:50 AM