Donald Lystra and That Sense of Discovery

In the 47th in a series of posts on 2013 books entered for The Story Prize, Donald Lystra, author of Something That Feels Like Truth (Switchgrass Books), discusses where his ideas come from, where he writes, and how he's gotten used to a different way of thinking. 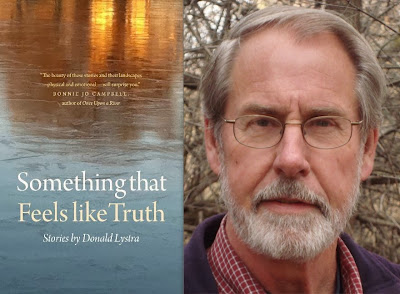 How often does an idea for a story occur to you, and what triggers those ideas?
In most cases I start with a situation or characters I've seen or experienced firsthand, though possibly in a very incidental way. Usually there is something in the situation that feels unresolved or out of balance, something that is not apparent but that you feel is slightly wrong. Then I move the characters forward, seeing how they interact and deal with each other and with their circumstances. If I can do that with honesty, a point will usually come when something gets revealed, a character will have some insight that gives him or her a better or more honest grasp on life, or the reader will have that kind of insight. Someone—maybe Flannery O’Connor—said that the ending of a short story should be "surprising but inevitable" and I think that's a good way to think about it. Something is wrong but it's not clear—to either the reader or the writer—what that thing is until a character has struggled for a while to uncover it. That, for me, is one of the great pleasures of writing fiction (and one of the great values), that sense of discovery that comes from blending facts and imagination.

Where do you do most of your work?
I write in the morning and I write in places that are rather stark. I don’t want things around me that provoke thoughts or memories because I want to concentrate on the characters I'm writing about. Most of my writing is done in a carrel of the Hatcher Library on the University of Michigan campus in Ann Arbor, which is the town I live in. Generally I make my way to the Library when it opens its doors at 8 a.m. and stay until about noon. The library is sparsely populated during the morning hours so I have the added benefit of solitude.

In the summer and fall I live at an old farm on the Leelanau Peninsula in northern Michigan. There’s an abandoned pump shed on the property that I’ve cleaned out and turned into a writing studio. It has a small but beautiful view of Grand Traverse Bay, which violates my rule about starkness, but I manage to deal with that.

What obstacles have you encountered as a writer, and what have you done to overcome them?
I was an engineer during my working life, so I suppose the biggest obstacle for me was getting used to the different kind of thinking that creative writing demands. As an engineer you assemble a set of facts and work through them to a conclusion, going from one level of certainty to another until you arrive at the final answer, which is never in dispute. As a writer of fiction you make instinctual leaps that are sustained only by the sense you have about the world. The conclusions you reach—if that's the right word—are only as true as your feelings. Being confident about that, to make those instinctual leaps, is difficult for someone trained as an engineer, though once I understood the difference I found that I could deal with it.

Another thing that might have helped me is that I’ve never particularly believed in the left-brain/right-brain model of intelligence, so I wasn’t daunted by the idea that I couldn’t do it (write fiction, I mean—at some level). I think the idea that a person is programmed to go only one way in life is pernicious, and a recent invention.
Posted by The Story Prize at 11:33 AM