Shawn Vestal and the Artistic Takeover

In the 55th in a series of posts on 2013 books entered for The Story Prize, Shawn Vestal, author of Godforsaken Idaho (New Harvest), talks about often starting a story without an idea and taking one from Henry James. 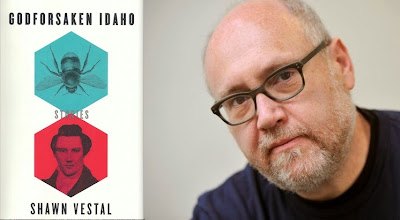 Almost always, for me, stories begin with the paltriest little bean—a scrap of language, a predicament, a joke, an attitude, a voice—and little more than my desire to see what kinds of flavors I can extract from it. Sometimes, inch by inch, a paragraph or two of real story will emerge out of the imaginative play and false starts and silly side roads and verbal goofing-off. The making-it-up. Very often, the making-it-up fails me. It will founder on an absence of character and authentic life, and after some time I will start with a new bean.

I sometimes feel insufficient in this respect—many of my writer friends strike me as much more natural storytellers, as people who imagine narratives in whole—but I am coming to have faith in my ability to eventually discover a story idea, even if it doesn’t show up until late in the process, and even if several other ideas must wither for me to get there.

If you've ever written a story based on something another person told you would make a good story, what were the circumstances?
I have never quite done that, but I often do something that feels similar to me: take an existing story or idea and retell it, turn it on its head, subvert it. In my collection, I did this with the story of the Mormon pioneers and the seagulls—a story that is an important part of the church mythology, and one that I had heard many times while growing up. In that version of events, a wave of crickets threatens to destroy the crops of the pioneers, recently settled in Utah, when a flock of seagulls comes and rescues the Saints from ruin by eating the bugs.

In my story, “Gulls,” I tried to take the pieces of that story, and make a new one—one with different meanings, different suggestions, different conclusions. An artistic takeover. Another story of mine, “Diviner,” is my own reinterpretation and fictionalization of some actual history regarding Joseph Smith, the founder of the Mormon Church. I find this very compelling, for whatever reason—the notion of taking someone else’s story, and breaking it apart, and putting it back together for myself and seeing what I end up with. I have a long-term goal to take the Henry James’ novel, “The Ambassadors,” and rewrite it as a crimey story set in Washington state, with my home of Spokane standing in for America and with Seattle standing in for Europe. I like to think of this less as stealing than as Henry James giving me a story idea.

Almost all other writing advice — write what you know, show don’t tell, appeal to at least three senses, make sure your main character undergoes a change, be sure to give the dog a name—is apt to range from excellent to atrocious, depending on the context of any single piece of writing. Most often, such advice is mediocre and obvious, but it is also the best we can do.

The voice I often hear in my mind when I’m revising something is that of my friend, the author Sam Ligon, and he is saying: Can this do more? It is always the right question.
Posted by The Story Prize at 6:52 AM