Kristiana Kahakauwila Starts with an Image

In the 60th in a series of posts on 2013 books entered for The Story Prize, Kristiana Kahakauwila, author of This Is Paradise (Hogarth), contrasts a story that took her ten years to get right with one she wrote in a single night. 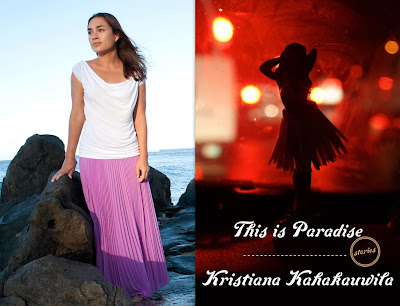 When I was an undergraduate at Princeton University I wrote a collection of short stories for my thesis. One of those stories centered on a relationship between a father and son, the former who is dying and the latter who wishes to reveal a secret. At the time, the story’s plot came together, but the narrative didn’t resonate on the page the way it did in my head. For the next decade—as I worked, went to graduate school, practiced writing, and moved from New Jersey to New York to Michigan to Hawai`i—I kept ruminating on this story about a son who wishes to confide in his father the one secret he knows will break his dad’s heart. I wanted to learn how to tell that story with the greatest honesty and resonance I could.

The first story I wrote for This is Paradise was “Thirty-Nine Rules for Making a Hawaiian Funeral into a Drinking Game.” I wrote the initial draft in a single night, as an email to a friend. The next morning I re-read the email I had sent, and I realized I had the beginnings of a story. Although the revision took me several months, that first draft came as a rush of emotion. I was, after all, just returning to O`ahu from my own grandmother’s funeral, and all the complexity of my feelings—sadness, loss, appreciation, elation to have been surrounded by so much family—drove my writing. In the center of all this emotion was a single image—of cane burning on the highway at night, and the sweet-acrid smell of the air.

My stories tend to spring from a single image that I can’t shake. Maybe the image is something real, such as a photograph or the scent of cane burning. Other times the image is something I’ve dreamt or imagined, but it lingers with me, inspiring an emotional response. Always, a question hovers over the story, and my writing is a way of attempting to articulate the question, and its possible answers, in some way.

Which brings me back to that story I first wrote more than ten years ago. I returned to it when I was building This is Paradise, and I set out to better understand the father and son. I had this image of an old paniolo—a Hawaiian cowboy—in bed. He’s frail, but he’s commanding. He has a sharp sense of humor, like most Hawaiian men I know. On his bed is a woven blanket the colors of the ocean—blues and greens, undulating. His son hovers in the doorway of the bedroom, afraid to step all the way inside, while a male nurse carefully shaves the paniolo’s face.

When I decided to revisit this story, I started with this image of the father, his nurse, and the son. In lieu of the mother from the original version, I added a sister. The tension between siblings added a new element to the story, making it not just about a father and son but about a family, their ranch, and their relationship with land and legacy. Because I’d added a ranch, I then needed to describe the cows, the barn, and the land itself. And I had to see the characters interact with this land, with their legacy. When they did so, the story lengthened, tripling in size, and the characters’ desires gained complexity.

What remained the same was the central question that had driven the story in the first place: What secrets should we tell and which should we keep? The arc of the story, its central drive, didn’t change. But my process for negotiating that question, and the characters’ responses to it, was all new.

In the end, “The Old Paniolo Way,” took me a decade to complete, while “Thirty-Nine Rules” took me a single night. The rest of the stories were written within a two-year period that kicked-off with the drafting of “Thirty-Nine Rules.” I may have written intensely in that two years, but I was using the lessons of the previous decade, listening to my characters rather than myself, writing at the edge of my own emotions, and finding that the drive of each story—and the collection as a whole—lay in questions I sincerely wish to understand.
Posted by The Story Prize at 7:46 PM