Ito Romo and the Lives of Others

In the 58th in a series of posts on 2013 books entered for The Story Prize, Ito Romo, author of The Border Is Burning (University of New Mexico Press), discusses the origins of a story, why he writes the way he does, and where he does his work.


On what triggers an idea for a story:
Most stories usually start with a brief but real-life incident that made an impression on me. In this collection, for instance, there is a story called “Redhead.” Here’s the first couple of paragraphs:

Her hair caught fire years ago, Christmastime, as she bent over to light a cigarette on the gas stove one night—stinking drunk. It never grew back right after that, patchy and frizzy and uncombable, so she shaved her head with disposable Bic razors in the shower every other morning.

Since she could choose hair color now, she wore a red wig of real, human hair she found for thirty-five dollars at the Goodwill Thrift Store. It had been combed semi-professionally by women from the Goodwill’s back-to-work program. When she’d first seen it, she held it up in front of her and scrutinized it carefully, her eyesight already beginning to go from old age, then she had slipped it on and stared at herself in the mirror. One of the girls working close to the counter was cleaning out an old chest of drawers someone had donated; she looked at her and said, “That’s real nice, ma’am. Real nice.”

Two years later, she wore it still, though now it was uncombed and wild, kind of like the fire.

In this particular instance, the story starts with something that happened to my grandmother’s twin sister. It was an image I had in my head for many years although I never really saw it take place. My grandmother, Carlota, and her sister, Dalila, were born at the turn of the century on the border between the U.S. and Mexico in Laredo, Texas. Seventh generation Texans, they, along with their two brothers and another sister, were really “old school.” They had grown up in the same home I grew up in—two-foot thick stonewalls, wooden beamed ceiling, a Spanish colonial home built around 1750. Lila, as we called her, left Laredo as a young woman to study in Austin (quite a feat for anyone from that region, much less a woman—and a Mexican-American at that), then taught elementary school in Robstown, Texas, where she moved after marrying and where she lived for the rest of her life. She had long silver hair, which she wore in a tight bun at the top of her head. When she’d come to Laredo from Robstown to visit my grandmother Carlota, I’d sometimes see her sitting in my grandmother’s living room, both watching a telenovela, while Lila combed and re-combed her hair, which, as long as I can remember, had been down to her waist.

Years later, after I’d left Laredo and gone off to college, one of my sisters told me that Lila accidentally set her hair on fire one morning as she lit the gas burner on her stove top. She was okay, had only minor burns on her scalp, but I imagined how horrible it must have been for her. This small but vivid imagined memory is what inspired the beginning of the story about Matilde in "Redhead."

On the reason for writing:
I recently read from my collection of short stories for a university audience, and after the reading, I asked if there were any questions or comments, and the first question came quickly from one of the students in the crowd, “Why do you write the way you write.” At first I said, “You know, that’s a really good question, existentially, but what exactly do you mean?” And the student said, “Well, the short, sometimes really short, stories; the short, tight sentences; the intense rhythm; you know, the vivid, really real images; all of those things.” And out of nowhere, without even thinking about it because I had never had a “reason” to write the way I do, I said, “I guess what I want is that for 7 to 10 minutes of your life (because that’s what it takes to read one of my stories), I want you to really feel what someone else is going through, to live, for just a few minutes, the lives of those people we hardly think about.” I used to think that to be able to do this, I needed long, frilly, complicated sentences, but after years and years of fine-tuning, I finally realized that the simpler and more direct writing gave me the immediacy I was looking for. 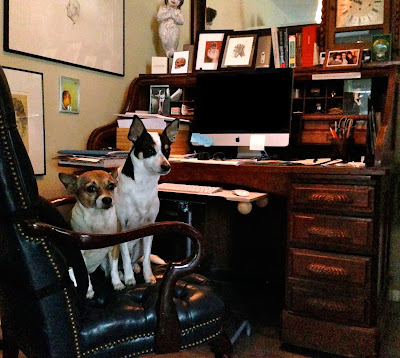 On where I write:
I write all of my stories at this roll top desk.  It belonged to my great-grandfather, Baldomero Chacon, Carlota and Lila’s father.

Those two are my dogs, Xuxa and Lalo.