Susan Tepper on Making the Most of Insignificant Things

In the 45th in a series of posts on 2013 books entered for The Story Prize, Susan Tepper, author of The Merrill Diaries (Pure Slush), talks about randomly organizing collections and refusing to see obstacles. 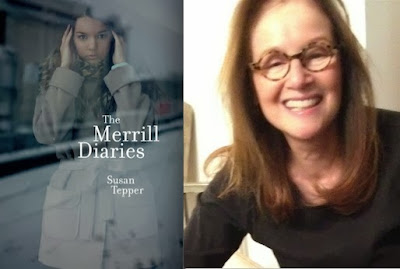 I get story ideas constantly, several a day, and often when I first wake up in the morning. Everything and anything. I have to push them away. It’s my belief that a writer can make a story out of the most insignificant things, such as a mud puddle.

What's your approach to organizing a collection?
I don’t really have an approach, I kind of follow my instincts. Though I did steal an idea from Billy Collins. He said he threw all his poems on the floor, then walked around randomly picking them up and making a pile. I did that for my first collection “Deer” and it worked really well, it had this organic unity for which I thank Billy Collins.

What's the worst idea for a story you've every had?
I wanted to write a story about a man who vacuum-packs his annoying wife in one of those blanket storage devices that suck the air out of the plastic bag and flatten the blanket. But I couldn’t get that story off the ground. But now that I think about it, maybe I should give it another go.

What's the best story idea you've had that you've never been able to write to your satisfaction?
I tried to write a contemporary version of Pride and Prejudice before others started doing it successfully. Mine was pretty sexy. I made Miss Lizzie into a contemporary character who wears red leather, a thong, and goes back in time in order to snag Mr. Darcy. I think it came out too clichéd.

Where do you do most of your work?
On a teensy computer in a newly fixed up room in my house. It used to be a junk room but I recently transformed the space adding a red leather desk chair, an aqua cage-type metal thing to hold my books, and there are always fresh flowers on the desk. Also some very nice pictures on the walls which are painted a pale butter yellow. And there’s a Pier One candle to attract the muse.

In what other forms of artistic expression do you find inspiration?
I write a lot of poetry, I’m about 50/50 with poetry and fiction. My first published book was a poetry chapbook called Blue Edge (Cervena Barva Press, 2006)

What obstacles have you encountered as a writer, and what have you done to overcome them?
I don’t see obstacles in anything. I’m wired not to see them. My mom is like that. She is a poet and essayist who got a piece on The New York Times Op-Ed page when she was 70 years old.

What's the shortest time it has taken you to write a story?
Micro-fictions I’ve written in five to ten minutes.

What's the longest time it has taken you to write a story?
I have stories I’ve been working on for over a decade. They kind of get lost. Then I’ll be poking around and find one, and start to re-work it. It’s good to do this, especially with very long stories. The span of time gives you a better perspective on what you’ve gotten down and what the story still needs.
Posted by The Story Prize at 8:02 PM