Saïd Sayrafiezadeh and the Pressure of Having to Say Something

In the 52nd in a series of posts on 2013 books entered for The Story Prize, Saïd Sayrafiezadeh, author of Brief Encounters with the Enemy (The Dial Press), talks about good ideas, bad ideas, and ideas that weren't his. 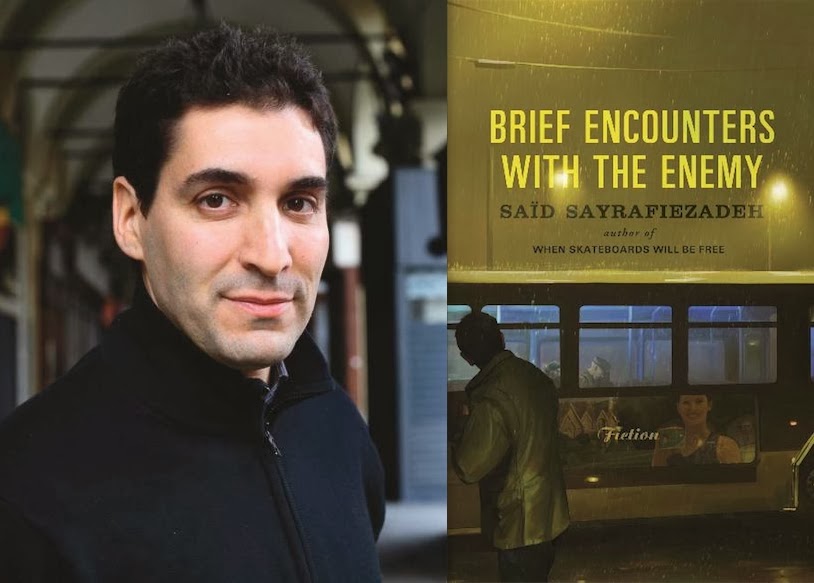 How often does an idea for a story occur to you, and what triggers those ideas?
There are two kinds of story ideas. There are the kind that flit through my head all the time, triggered by boredom or distraction or playing basketball, and they are generally vague and profound (to my way of thinking) phrases or images. A person standing by an open window at nighttime, say, with the curtains blowing around them. This is my least favorite type of idea, because while it sounds like a lovely image, the kind that would make a great moment in a story—a lovely image alone cannot a story make. No, what's needed are characters, plot, arc, dialogue, etc., and those are achieved by dispensing with profundity and sitting down and actually putting words on paper, which is when the real thinking occurs. It’s the pressure of having to say something that forces the mind to conjure up the story.

If you've ever written a story based on something another person told you would make a good story, what were the circumstances?

What's the worst idea for a story you've every had?
At some point, during the process of writing a story, every idea begins to seem like the worst idea for a story I've ever had. It seems to be the nature of writing. Brilliant at first, exhausting second, sophomoric third. The point is to ignore that naysaying inner mind and push through to the end.

What's the best story idea you've had that you've never been able to write to your satisfaction?
The New York City "draft riots" of 1863.

Where do you do most of your work?
For years I wrote at the wonderful and cozy Housing Works Bookstore Café, but I ended up becoming friends with too many people, and drinking too much coffee, and having to go to the bathroom too much, which always meant closing up my laptop and praying no one stole my seat.

In other words, I wasn't getting any work done. Now I write from the comfort of my dining room table. After my wife leaves for work, I wheel my desk chair in from the bedroom and set everything up just the way I like it. I even have a Nespresso machine to keep me company. In the evening, I clean everything up and wheel my chair away. There is no sign of labor. It's as if nothing has taken place.

In what other forms of artistic expression do you find inspiration?
Does basketball count as artistic? What about Howard Stern's radio show? I marvel at the way he creates stories, deftly handling multiple characters-many of them with mental disorders. His show has the quality of a soap opera.

What's the best and worst writing advice you've ever gotten?
"No one's going to care about your upbringing in the Socialist Workers Party." This from an agent that I was hoping would sign me. She told me that communist upbringings had been trendy a few years earlier, but that now the trend was about people who had grown up in religious fundamental households. (The irony, of course, is that growing up in the Socialist Workers Party is tantamount to growing up in a religious fundamental household.) I remember being devastated by her advice, but also thanking her profusely for her time, and for saving me the trouble of actually having to write an entire book about my childhood—which apparently no one would be interested in.

"Don't listen to her." This from my therapist. He has always been of sound and supportive advice when it comes to my writing career. That's one of the reasons I've dedicated my books to him.

What obstacles have you encountered as a writer, and what have you done to overcome them?
A lecherous professor in college who fawned over my writing so much that it nearly paralyzed me artistically. Praise, especially gratuitous praise, can be as detrimental as criticism, especially when it's bound up with the expectation that you will at some point sleep with the person who is praising you. After I was able to extricate myself from that professor, I had to contend with the obstacles of day jobs, discouragement and self-doubt. Frankly, those were much easier to contend with. If you use them right, they can also be galvanizing.
Posted by The Story Prize at 8:42 AM