In the 51st in a series of posts on 2013 books entered for The Story Prize, Courtney McDermott, author of How They Spend Their Sundays (White Point Press), talks about finding inspiration in mundane details. 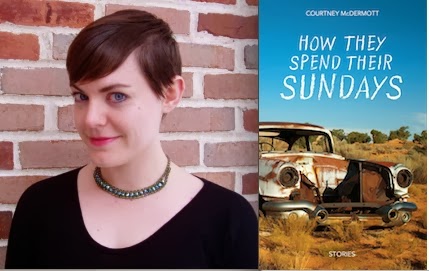 How often does an idea occur to you, and what triggers those ideas?
A news headline mourning a felled tree at Versailles.
A pair of grungy teenagers discussing techno-Buddhism on the bus.
A stack of empty peach boxes in the corner of a room.


I encounter ideas wherever I am present, and ideas occur to me every day. Not always great ideas or ideas I’ll end up using, but how I look at the world is very much influenced by my role as a writer. When I encounter something new, I attempt to understand it. When I experience something familiar, I conjure up new metaphors.

I never put in headphones when I walk or ride public transportation because these are some of the key periods of time when ideas spark. Places and spaces certainly trigger ideas for me. How people interact and move within a space intrigues me. I often take minute and mundane details (the way someone chews their nails, for example) and use that to build a story upon. Most of these ideas stay on the scraps of papers I first trap them on, but the main purpose is to keep viewing the world through words. I don’t have enough lifetimes to fully develop all of my ideas, but I write them down anyway.

The other day, I rolled awake, scrounging around for a notebook, because I had a dream that jabbed me between the eyes and commanded: Write this down! My fingertips already quiver in anticipation of working on it someday (when I finish this novel I’m working on first). There is a girl and an accident, in a sort of sci-fi/medieval world (I am still trying to figure out what I mean by that). There is time travel and a family pushing against these movements of time. The form of the story is what excites me—how it moves through time and space, skipping ahead, moving backwards, switching narrators. Even if the story never happens, or turns out to be unpublishable, the excitement it imbues in writing makes it worthwhile.

Because ideas creep up at any random time, without much planning or intention, I don’t have a system or precise way of gathering ideas. Instead, here are some of the ideas that I’ve stumbled across in the last couple of weeks, which I have written down and hope will ferment into delectable stories. And if not, at least they get me thinking.

These are just some ideas from a short period of time. If there is a simple answer to the question above, it is this: Awaken yourself and ideas will come.
Posted by The Story Prize at 8:25 AM