In the 33rd in a series of posts on 2015 books entered for The Story Prize, Adrian Tomine, author of Killing and Dying (Drawn & Quarterly), explains how he eliminated a scene to preserve the clarity of a story. 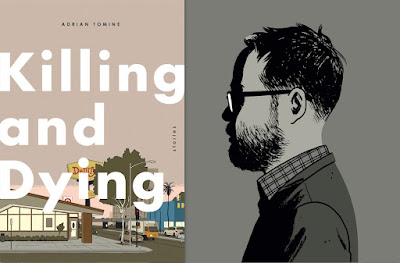 What’s the best phrase, line, or passage you’ve had to cut from a story?
I’m loath to describe anything of my own as “the best” (even when I’m talking about things that ended up discarded), but here’s something that I agonized over and ultimately chose to cut from a story recently.

“Killing and Dying” was one of those stories that opened up in a variety of unexpected directions once I started getting into it, and the revision process involved more ruthless cutting than usual. One of the biggest last-minute cuts I made was a little subplot involving a group of comedy afficionados who attend the climactic open mic event. Their reaction to the performers evolves from cringing pain to ironic laughter, and they basically enjoy the event for all the wrong reasons. The character Jess misinterprets their laughter as genuine, only adding to her father’s discomfort. Here’s a very rough version of a scene that takes place when the father leaves the café and overhears these guys dissecting his daughter’s performance:

I felt like these background characters could’ve taken on a life of their own, that I knew so much about them. I also liked the one-in-a-million possibility that Jess was actually a genius, and that maybe her performance was good in a way that her father couldn’t possibly comprehend.

In the end, I decided that this material was interesting but not crucial. And without saying too much, I felt that the excised sequence ran the risk of muddling an aspect of the story’s conclusion that was best left alone.
Posted by The Story Prize at 8:06 PM