Barbara Paul-Emile and the Insuppresible Urge

In the 42nd in a series of posts on 2015 books entered for The Story Prize, Barbara Paul-Emile, author of Mosaic (Eunoia Publishing), explores the source of her impulse to write. 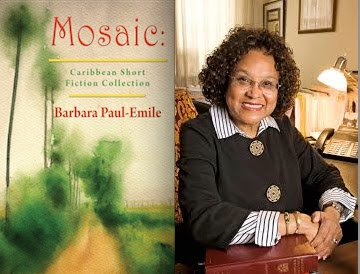 What do you think is the source of your impulse to write stories?
I write stories because life is about stories. We are story-telling entities and the culture of our world is based on a composite of our stories. Through stories we define who we are. We connect with each other, build communities and shape nations. Through stories of shared experience we explore our principles, values and define existence. Human life is all about stories.

Looking back at my early life, I recall that I started to write stories when I was quite young in an attempt at self-definition. At about twelve years old while living at a privately owned and run boarding school in Kingston, the capital city of Jamaica, in the Caribbean, I started my first collection. At that time, my stories dealt with the experiences shared by Jamaican students living at boarding schools on the island and away from home. My focus was shaped by my voluminous reading of English novels about adolescents which portrayed the experiences of girls at various boarding institutions in England and Wales. Jamaica was at that time, an English colony and as such our practices were shaped by our colonial rulers. Our academic system and its values in their entirety were based on English traditions and models as reflected in our text books and all other pedagogical influences.

The realm that was the origin and source of these influences were entirely unknown to most of us because as young students we had never left the island. Great Britain was for the most part a land of myth and legends. We read about the mists drifting off the moors in England, the snow-capped mountains in Wales and dangerous bogs but had never seen any of these aspects. The focus of the stories that I wrote at that time followed the stock pattern of the English stories except set on a tropical island. The plots dealt with the trials and tribulations of living at Dickensian schools as reflected  in conflicted student relationships, the rigid and restrictive rules with which we had to contend and the homesickness from which we suffered.

I spent much of my leisure time writing. I soon discovered, however, that writing stories was one thing but allowing others to read them was another. While my stories were sometimes quite well received, at other times classmates found descriptions that they thought related to their own personalities and activities and this lead to arguments and much divisiveness if they were displeased. Some classmates considered it quite presumptuous of me to dare to think that I could write stories at all. For in truth, all of our books came from England and we had never met anyone who wrote those books. In fact, we had never met anyone who wrote books at all.

On one occasion, in the absence of our teacher from the classroom, my stories were passed around and the class erupted with boisterous laughter as passages were read out aloud. Embarrassed and ashamed, from that day forth, I felt it best to keep my writing to myself. One teacher had, ironically, already written home to my family to report that I was doing far too much writing and reading and was not concentrating on my homework.

Years passed, but the urge to write stories could not be stilled. I continued to write as an undergraduate adding the composition of poetry and longer literary pieces to my list of creative interests. I had, however, learned my lesson and kept my activities secret. I was admitted to graduate school, and dutifully composed academic papers but my heart was not there. The urge to continue with my creative writing could not be suppressed. Finally, there came a time when I gave up the struggle and boldly decided to devote myself to writing and publishing in the area of my first love: creative writing.

Name or describe some hidden influences on your work.
It is my intent to share with readers my experience of life growing up in the Caribbean islands through the prism of literature. I wish to show that these islands are more than pristine beaches. They offer a varied culture rich in history, custom and tradition shaped by a multiplicity of external and internal forces. I seek to present the multi-layered and complex social relationships that exist in Caribbean society, to uncover the dynamics that shape the resourceful choices that the characters make in the context of cultural frame-works and personal values.

While much information has been disseminated about the Caribbean as a region for vacation travel, very little is known about the tenor of the lives of the people who live there. In travel brochures, glossy magazines, and TV commercials, the Caribbean is represented in beautiful color as a necklace of azure islands strung out in sparkling blue waters. The region is seen as a kind of paradise where happy and carefree people lead bucolic lives, joyous and pain-free.

Little is known of their cultural traditions, the ways in which reality is conceptualized and perspectives shaped so as to allow them to survive and overcome the challenges they face in their daily lives. Little is known of the priorities that form their values, personal and social, which in turn affect relationships creating the fabric of their society. Too little is known of the impact of the economic hardships that they face and the courage it takes to overcome. In what way does class affect private and public relationships? What is the role of the supernatural and other spiritual dimensions in people’s lives? What are the core mythic beliefs that hold the social fabric together? Mosaic explores several of these philosophical, social, and psychological terrains in the stories it presents and shows life in its panoply of colors.

This collection, in highlighting particular aspects of Caribbean society, explores attitudes towards parenting and child-rearing, relationships between males and females in romantic situations, roles played by both genders in family affairs and in society at-large and the place of the mystic, village obeah woman or man, as healer and mediator between the world of the living and of the dead. This collection allows me to share with readers the voices of the characters that speak in my creative fiction, giving life to their actions, personalities, interests, and priorities thereby presenting the dramas that punctuate their lives. Mosaic presents several of the different faces of the Caribbean as I have experienced, observed and envisioned them.

The character of Caribbean people, described in broad strokes, is fascinating and thought-provoking.  Resourceful, strikingly devoid of self-pity, Caribbean people are easy-going, quick to share their opinions and perspectives while rejecting victim-mentality. Resilient, enterprising, and engaging, these open-hearted islanders exhibit an infectious sense of humor and good spirits. Gregarious and optimistic, most are always looking for that second, and occasionally, third or fourth chance in life.  Economically, times are, for the most part, very hard and the road to success for many is non-existent. Yet, inherent self-confidence and belief in the ultimate beneficent running of the universe promotes and strengthens the will to survive and to prosper in difficult times.
Mosaic, presents stories that focus on the vicissitudes of daily life as experienced by people in small towns and rural districts in the Caribbean islands. It seeks to uncover the dynamics that shape the resourceful choices that characters make within the context of cultural frame-works and personal values. These tales deal with personal dilemmas, psychic themes, class distinctions, and social issues as shaped by the legacy of colonialism and slavery and as expressed in the complex heritage of the region.