John McManus Rebuilds from the Ground up

In the 44th in a series of posts on 2015 books entered for The Story Prize, John McManus, author of Fox Tooth Heart (Sarabande Books), tells about a novel he boiled down to a story. 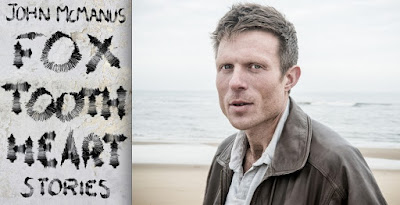 Sometimes my revision process goes as follows. Step one: I decide to write three thousand words a day for two months until I’ve got a new novel, because Faulkner wrote As I Lay Dying in six weeks and hey, I’ve learned from my mistakes the last ten times I tried writing novels this way. Two months later I wind up with 200,000 words. By now I can perceive some logic problems in the story. I rewrite the whole thing from another character’s point of view. I rewrite it again from the original point of view.

Years pass. I feel pure horror to think I might ever have showed the manuscript to anyone. What if I die and someone finds the file? I would erase it from my hard drive, but I’ve spent two thousand hours on it. By now I’m a different person, one who enjoys authors I scorned then and vice versa. Maybe the draft is worth another look, but the only way to face reading it again is to slash and burn as I go.

To my surprise, a plot starts on page 270. One sentence out of ten actually evokes the physical world instead of someone’s trite thoughts. I keep those sentences. When I’m done, I step back to see what kind of husk is left. It’s roughly the length of a short story.

That’s similar to what happened with “The Ninety-Fifth Percentile,” the seventh story in Fox Tooth Heart. I wrote a so-called novel about a closeted kid from San Antonio who drank to dampen the shame he felt about being gay. He didn’t have friends. He got high and rode the bus in loops around town. A gay couple down the street took an interest in him. They’re the ones who sold him the drugs. He kept riding buses until in a 7-Eleven parking lot he encountered a sketchily drawn tragic bad-boy figure of the sort I was always infatuated with myself. They hung out; still, nothing much happened until he turned sixteen and got his license, which was when he switched from riding buses to racing around on highways in his dad’s sports car. Here the story picked up speed, at least until a hazy and highly melodramatic disaster caused him to flee to Montana.

Any of that sounds potentially dramatic enough when I present it in a quick summary, but my manuscript was 500 pages long. The couple down the road seemed cartoonish to me, like the boy’s mother and father and the boy from the 7-Eleven, so I got rid of all of them. I cut the long looping bus rides. I cut almost every word prior to page 250. I cut Montana. I realized a single car ride after the boy’s sixteenth birthday did a fine job of expressing something I’d spent eighty pages trying to get across when he was a passenger. I changed his name and moved him to Houston and gave him a new family and rebuilt the thing from the ground up, retaining little beyond the mood.

That meant retaining a sense of how I intended for the story to make people feel. I wanted to convey the kid’s bottomless yearning. And I wanted readers to feel the dread accumulating in him as costs accrued from the lies he told. Whatever wasn’t working toward those goals, I cut. Suddenly I had a useful formula, oddly easy to follow. Before long I had 4,000 words instead of 200,000. I added some new material to tie things together, and then I had a story I liked—which is not to tout my revision methods. This has been a cautionary tale.
Posted by The Story Prize at 7:00 AM