In the 34th in a series of posts on 2015 books entered for The Story Prize, Rob McClure Smith, author of The Violence (Queen's Ferry Press), describes his impulse to write and some influences. 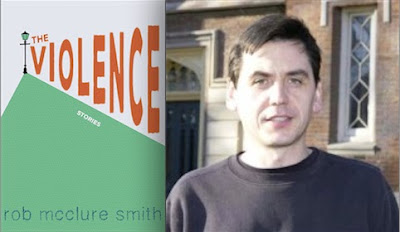 What do you think is the source of your impulse to write stories?
I grew up in a housing scheme in the West of Scotland. There were no books in that council flat besides the Bible and Reader's Digest compilations. The passport to my imagination was a public library card. Later, “streamed” into academic classes, I met others who had been reading all their lives. They knew the names of all Tolkien's dwarves and made me feel awful that I didn't. So I write out of resentment, always needing to prove myself against an imagined enemy, and grateful to this day that I still don't know any names of Tolkien dwarves. Of course, in a place of deprivation and violence (and Margaret Thatcher reduced the industrial belt to a scorched earth wasteland), lying is a necessary survival mechanism. And writers are consummate liars (any writer who denies it is lying); every metaphor a lie, describing a thing in terms of what it is not.

When does a story begin for you?
When two opposed images collide. Which is why Eisenstein's writing on montage is more useful than most writing how-to books. Coleridge said something similar about the “reconciliation of contraries,” but that could have been the opium talking.

Describe your revision process.
The hardest thing is the knowing when to leave well enough alone. Writers are obsessive, and it's hard to let go. Sometimes I have to close a file and pledge not to open it for a year. It's not going anywhere. It’ll be there, waiting to torment me more. But I'll be elsewhere.


If you teach writing, how does it affected your work?
I teach in a department that hosts one of the best undergraduate writing programs in the country (or so AWP says), and I have never taught a writing class. It’s the best of all possible worlds. I get to work with wonderful young poets and fiction writers without having to critique their writing. My colleagues suspect I'd corrupt them anyway, by assigning Flann O’Brien novels and having them play with Oblique Strategies. They're right. Instead, I get to show them The Lady Eve and Picnic at Hanging Rock and Badlands and Chungking Express and so on, which is like being paid to eat cake.

Name or describe some hidden influences on your work.
Emily Dickinson’s aesthetic of sumptuous destitution is embedded in there. William Mcllvanney is there too, like a homeopathic trace mineral. I used to write under the influence of Denis Johnson. Then I met him and he was extraordinarily nice and genuine and had just accepted a journalist assignment in an Iraqi warzone so he’d have an excuse not to attend the National Book Awards (he won). So I decided then I needed to act more like Denis and write less like him.

Describe your collection in ten words or less.
Love hurts, and so does pretty much everything else.
Posted by The Story Prize at 7:00 AM