In the 47th in a series of posts on 2015 books entered for The Story Prize, Bonnie Jo Campbell, author of Mothers, Tell Your Daughters (W.W. Norton), contrasts stories and novels. 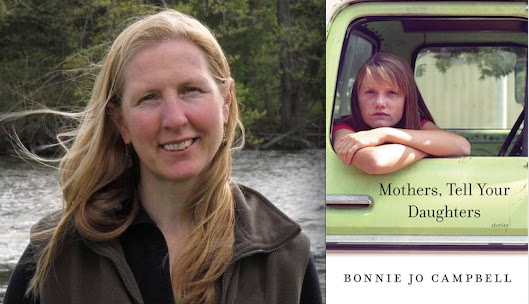 I’ve never set out to write a novel. I’ve always tried to write a short story and then if fail in my task, if I fail to wrap it up, I might have a novel, damn it. I’ve told this as a sort of a joke, but it’s true.

A novel, after all, is a dangerous creature, nothing to joke about. A novel goes on and on, exposing rib after rib like one of those escaped pythons clogging up the Everglades. The characters in a novel have to interact with a prescribed world in a plausible way, sentence after sentence, chapter after chapter, slithering toward revelation and resolution.

Give me short stories, glorious short stories that prod and punch and kiss and leave town before everybody sobers up!

A short story is like dating, while a novel is like a marriage, and we all know how bad those can be. No need to be honest or consistent or thorough on a date—just be interesting. Mysterious is good on a date.

That means a piece of flash fiction (there are three in Mothers, Tell Your Daughters) is like a one-night-stand, something I should have had more of before I embarked upon my marriage, now in its blissful 28th year. I won’t make that mistake in my writing life, of pursuing joy, contentment, and peaceful evenings.

No way. In my writing life, I’ll splash and screw around in any musky, murky, fish-stinking pond I stumble into, and I’ll reach down into the muck and grope for fleshy tubers, serpents, rubber boots. In my stories, I stick a finger into any honey pot, no matter the bees or bears.

Just try pulling a novel up out of the silty bottom by its tail—it will drag you back down, and you’ll be lucky if you escape.

The readers of short stories do not live in the real world. At least not while they’re reading. I wouldn’t dare generalize this way in a book-length work, but I’m hoping you’ll just go along with me here.

Over coffee or wine (red, please, unless you’re afraid I’ll spill on your couch), I could make the case that the reader of a short story lives in a magical world of suspended disbelief. After finishing the story, the reader can put the book down, do the dishes or grade some papers, let the whole story simmer in the brain, ferment like a cucumber pickle, or bob like a baby fetus in a jar of formaldehyde, like the ones I studied at length in the Museum of Science and Industry in Chicago.

You can’t just sit down and read a novel. You’ll ease your way into and then dishes will call to you or papers will need grading. You’ll have to cut your way out of that novel, re-enter the bitter cold real world, leaving a bloody wound in the whole experience. Probably you’ll be trailing the novel’s blood all day. (Next to the fetuses in the science museum, there were the slices of head and torso, exactly as thick as book chapters). And worst of all, you’ll track your real world debris back into the novel.

Novels can brilliant, life-changing. But don’t try it at home, I say to students at every opportunity. Especially to my own creative writing students. A joke, but not really a joke.

When Aimee Bender writes a story about an ogre, we are only a little surprised when the ogre eats his own children. That is one of the risks of being both a father and a child-eating ogre. I would pay a lot of money for that story by Aimee Bender, more than the price of the book. The ogre novel? Nobody needs that.

Let me confess. I do not have a drawer full of unpublished stories. I have just a couple, and I plan to finish them before I die. Stories are not practice for me, are not experiments, not playthings to be abandoned. If I wasn’t serious about a story, I wouldn’t have dragged it out of the muck to begin with. There are a few stories in Mothers, Tell Your Daughters that I worked on for twenty years.

When I tried and failed to date my husband, I admitted defeat and married him. “Gosh, I hope this works out,” I said. And if that’s not commitment, I don’t know what is.
Posted by The Story Prize at 8:00 AM