In the 36th in a series of posts on 2015 books entered for The Story Prize, Siamak Vossoughi, author of Better Than War (University of Georgia Press), reveals what he learned from Che Guevara. 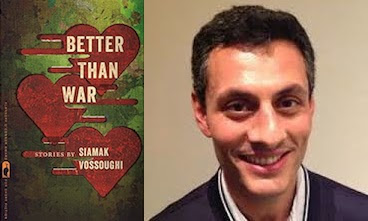 A few years after I first set out to become a writer, I read a biography of Che Guevara. He was a man I grew to admire greatly as I read more about him. But something happened as I read about him and his life. I had written enough by that time that I was beginning to know myself a little. What I knew about myself as I read the book was that I was not a man who could believe in shooting another man. I could admire a man who had done it, but I could not do it myself.

Picking up a pen was something I could do fully. I could be wholly committed to it. I could hold a pen and say, this is what I am putting my money on. There was nothing vicarious about it. I liked that notion, because one thing I admired about Che was his commitment. Once he decided that this was the tool he would use, he began to shape his mind and his body and his heart around that. There was a lot more than just target practice involved in picking up a gun, and there was a lot more than just sitting down at your desk involved in picking up a pen.

It was a way to move through the world. It was a belief that what you had to say to the world and to the people in it could be said in words, and that the saying of it mattered more than its reception. The reception mattered as well—it was wonderful to have a reception that built a connection between you and the person receiving it—but the saying of it by itself built a peace that was real even if nobody received it. It was still an extension of a commitment you had made to the tool you had decided to pick up.

I learned from Che that a man's tool required his complete commitment. Some time later, I understood what it meant for me to have a pen with me all the time. It meant that the people I was moving amongst had stories. I couldn't write all of them, but I could acknowledge the presence of all of them. It was work, but it was necessary work. It made the transition from moving amongst them to sitting down at my desk smoother.

It may seem like a pen and a gun are so far apart that my admiration for Che would have waned after many years of being committed to a pen. But that is not the case. Everybody has to choose the tool that is right for them. I still admire him just as much.
Posted by The Story Prize at 7:00 AM