In the 39th in a series of posts on 2015 books entered for The Story Prize, Ben Nickol, author of Where the Wind Can Find It (Queen's Ferry Press), writes of a life-changing encounter with vegetation. 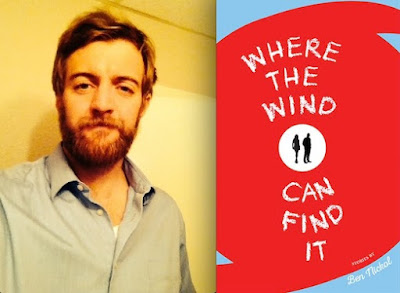 Owing to flexible work hours, strong coffee, a loud alarm clock, an understanding partner and the common thread linking all of these factors (unbelievable luck!), I have most of my early mornings to myself, to write. I climb out of bed and dress like a transient in sweats, a flannel shirt, a knit cap and moccasins; I eat eggs and toast and brew the aforementioned coffee; I do knee bends and back twists and finally address myself to the computer and crack my knuckles and get going.

It’s a peaceful time to write. This particular morning, for instance, the Montana town where I live lies under several inches of snow, the surface of which, under the streetlights in the alley outside my window, has a tinselly quality. It’s cold enough this morning to kill a whole waddle of penguins, and the sun won’t be up for several hours, but I’m cozy here in my vagrant attire. I can even see myself reflected in the windowpane. I’m like the ghost of a vagrant floating out there amongst the alley’s trashcans.

It also has been a productive hour to write, I believe, but I have been at this routine for nearly nine years (since my first year out of college, when work hours were not so flexible and if I wanted to have a story to attach to my graduate school applications it was going to have to get written before the cock crowed), and maybe four years back the grind of writing every day, every morning, started to catch up with me. I’d get the coffee brewed and get in my costume, and for the next several hours I’d sit before a blinking cursor with this kind of low-frequency groan reverberating somewhere in the back of my throat, until it was time to go onto the next part of my day.

There came a morning when the groan petered out gradually, and then ceased altogether, as if the weak battery that’d been powering me had finally run out of juice, and I sat at my computer screen not even breathing, a tendril of drool probably dangling from my lip. It seemed like a good juncture for a break, and so I took my dog into the backyard and sat in the grass.

I was living in Arkansas then. I remember it was a fragrant summer morning with the heat just getting started, and where I’d happened to plop down there was a little shrub in front of me with ill-seeming purple leaves. It was a pleasant yard, and if I’d sat a little to the left I’d have enjoyed a view of the Boston Mountains, but where I’d plopped was where I’d plopped—I was too brain-dead to scoot over—and so my view was going to be of the shrub.

I’ll warn you: things are about to get mystical now, as they are wont to do when one is exhausted and artistically frustrated. But there I was, gazing slack-jawed at this bush, and what I began to notice was the reach of the thing, the way it grew. It all began at the soil, where the spindly shoot twisted up into the Arkansas humidity. From there, the shoot branched into spindly twigs, which themselves branched into still-spindlier twigs, which were the twigs the leaves hung from. I observed the plant for a long while, maybe thirty minutes, and as I observed it, the thing started to seem less like a plant and more like an act. Does that make sense? There’d been something in its seed that needed to express itself, and the shrub was the shape of that expression, the course of it.

“Huh,” I muttered, and though at that moment a passerby might’ve believed me a simpleton who didn’t understand the shrub before him wasn’t a bus stop, I actually had experienced something by way of an epiphany. Like the shrub, any story I might write had its own ache within it, its own needs, and my job was actually less to write the thing than to allow those needs to express themselves on their own terms, and assume whatever shape they chose. In other words, I didn’t have to make a damn thing. I just had to hold still, be quiet, and witness.

It’s probably the best thing I could’ve ever discovered as a writer. Not to say that writing no longer tires me out—it does—but it tires me more in the way that reading tires me. I simply reach a point where I can’t keep up with the story’s expression, and have to rest awhile. Which let me tell you: that’s a whole lot better than sitting before a blinking cursor thinking you have to manufacture literature.

For the rest of my time in Arkansas, I visited that shrub most mornings before sitting down to work, and since moving to Montana I’ve incorporated other flora into my morning meditations. And I remember, that initial morning, standing up from the shrub and looking around for my dog. And I remember finding him at the back door, standing with his nose to the door like a porcelain statue someone had placed there as a prank. Showing me the way inside, showing me back to my desk.
Posted by The Story Prize at 7:00 AM