In the 46th in a series of posts on 2015 books entered for The Story Prize, Lenore Myka, author of King of the Gypsies (BkMk Books), compares her impulses to join the Peace Corps and her impulses to write. 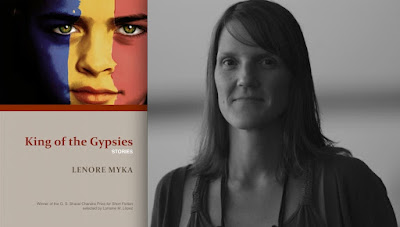 What do you think is the source of your impulse to write stories?

At a reading several months ago, someone in the audience asked me what compelled me to join the Peace Corps. I was promoting my book at the time, much of which is set in Romania, the country where I served as a volunteer in the mid-nineties, and many of the people in the audience had come because the local Returned Peace Corps Association had advertised my event.

I stumbled my way through an answer, saying something about how as a child watching Saturday morning cartoons, I would see those commercials of people digging trenches in Sub-Saharan Africa and took to heart the old tagline “The Toughest Job You’ll Ever Love.” I mentioned that I’d studied abroad as a junior in college and enjoyed traveling. My answer was unsurprising; the questioner looked vaguely disappointed. After a pause during which the audience seemed to be waiting for me to say more, we moved on to questions of craft.

As is often the case for me, I was able to better articulate a truer, more accurate answer to this question weeks later; the gifts, I suppose, of time and perspective. I believe my interest in the Peace Corps is born from the same piece of me that wishes to write. In fact, writing and my interest in other cultures, other lands, dovetail quite nicely. Both ventures require an insatiable curiosity about the world. They require an interest and empathy in others who are oftentimes dissimilar from ourselves. They demand a willingness to place ourselves in foreign and uncomfortable territory so that we might learn something new about the world, but also—and more importantly—about ourselves. Both activities come from a desire to make sense of the senseless, oftentimes cruel, and frequently beautiful planet we inhabit.

I can recall as a child imagining, to the point of near physical exertion, what it might be like to be my mother. Or the neighbor down the street who was bound to a wheelchair. Or our family dog, the horse I visited during my neighborhood meandering, the toads that lived in the basement window well. I had seen the movie “Freaky Friday” and was obsessed with the idea of living another life, zipping myself inside someone else’s skin as if it were a wetsuit, if only for a day. As a family, the most exotic our vacations got was Hilton Head Island, but even as an eight- or nine-year-old I had larger aspirations. Much to the chagrin of my father, I would quite literally dig holes in the backyard, hoping to get to China.

It sounds ludicrous, digging a hole to China. Or, an alternative view: It sounds magical. Adulthood, in my opinion, comes too early and has a blunt way of beating out the imagination in most of us. And maybe this is the key to being a writer, that to do so requires some degree of arrested development. Despite being fully entrenched in midlife I frequently don’t feel much older than sixteen. Perhaps this is what keeps me going—dreaming, imagining, envisioning worlds beyond my own—this youthful clinging to imagination, to wonder. Whatever the reason, I’ll keep digging holes to China, with pen and paper, with keyboard, until I can dig no more.
Posted by The Story Prize at 7:00 AM