Fatima Shaik Travels into the Unknown

In the 37th in a series of posts on 2015 books entered for The Story Prize, Fatima Shaik, author of What Went Missing and What Was Found (Bayou Road Publishers), discusses truth vs. honesty in writing. 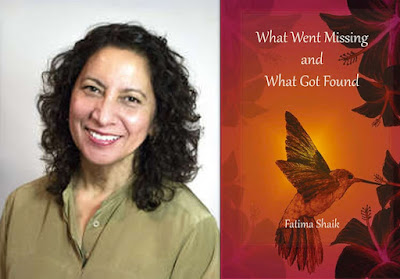 Journalism trained me to gather as much information as possible in a small notebook and place it alongside my keyboard for reference when I sat down to compose a story. Or, if I was driving back from a scene, I repeated aloud the key figures, the action, the environment, and the newsworthy cause of the article until I slowly formed a one-sentence summary lead. In short, I learned to have all of my facts straight and my research completed before I began writing. Those were the most important lessons I had to unlearn when I became a fiction writer.

Fiction writing is traveling into the unknown. Facts are markers along the way, but the real destination is emotion.

So I now begin with a feeling. This is work off the page. It starts when I see or hear something that evokes my empathy. The trigger can be a whisper from a nearby booth in a restaurant, the stride of a passerby, the smell of onions browning in someone’s kitchen, the metallic taste of water from a fountain, or any number of stimuli. Some sensation causes me to feel—for example, melancholy, anxious, wistful, hopeful, or empowered, and I follow that feeling. I reach deep into it until I hear it as a sentence of dialogue or the description of a setting.

I try to retain this voice for as long as possible to create a story that is not factually true, but honest.

I once wrote a historical novel about slavery in the voice of an enslaved girl. She did not even know she was a slave until chapter three, nor did the Young Adult readers. She only knew that she was treated differently, spoken to badly, and finally quantified along with the animals. Then she began to understand the world that she was up against, and so did we.

I was living in the South at the time when I began this book. I was waking daily with a feeling of heaviness. So I pursued the feeling and the voice of the main character came to me. I wrote for a while until I knew who she was, then, I did research.

I learned about the setting (18th century Louisiana), the plot (the cost of children and miscegenation), and the minor characters (the tribes and nationalities of the local inhabitants). About 20 pages of notes—mostly from primary sources such as maps, journals, newspaper ads, and sales documents—gave me the details.

Still, my overriding mission was to know the way it felt to be enslaved and a child. So I saw the world—not through the research—but through her eyes. She woke daily in a corner on the floor, stirred and carried pots, and was called and sent to chores all day.

My current book of short stories, What Went Missing and What Got Found, could be subtitled "The Inner Lives of Outsiders" because the book is set in my hometown of New Orleans and challenges the clichés that have attached themselves to the city’s inhabitants. Jazz musicians, religious eccentrics, service workers, and jovial crowds, for example, inhabit the backdrops of novels, drawn from secondary research and, occasionally, authors’ vacations. Often, these characters develop from descriptions of their occupations and skin colors. But, in New Orleans, those characteristics are far down on the list of our revealing traits. So my motivation in writing this collection was to reveal the thoughts and feelings of members of an imagined, but fully-realized, community.

The journalist researches her environment makes a generalization about the world then describes the particulars. The fiction writer’s process is much different. She starts with a specific, innermost feeling to make a statement about the world, then, to understand it, she looks inside herself.
Posted by The Story Prize at 7:00 AM