Leslie Pietrzyk Gets All the Answers

In the 41st in a series of posts on 2015 books entered for The Story Prize, Leslie Pietrzyk, author of This Angel on My Chest (University of Pittsburgh Press), describes her collection, a good writing day, and what sparks stories for her. 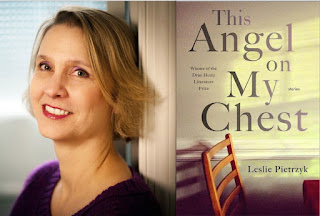 Describe your collection in ten words or less.
Unconventionally-linked, emotionally tough stories of my young husband’s sudden death. (Pro tip: If you throw in a hyphen, Word counts two words as one!)

Describe a good writing day.
I’m not a morning person, so I typically write in the afternoon, from about 2 to 6 or so. My morning is often overtaken by errands and crud (and Facebook, if I’m being honest), but the afternoons are for work. So on this imaginary “good” day, I’ll open the file from the previous day, re-save the document as a new file with the new date (obsessive much?), and start by rereading and making small corrections. And why not take this imaginary day into “ideal writing day,” which would mean that I woke up in the morning with a thrilling new insight into the story, so I’ll get to spend time integrating that new idea into my text. I’ll forge on into new drafting, and I’ll write until something surprises me, which is something one of my favorite writing teachers used to say we should do, and since this is an ideal day, this exciting surprise brings me to the conclusion of the draft right at about 6 or so as a late November sun is setting beautifully over the trees outside my window. Then it’s off to cook something fabulous for dinner, which I love as the conclusion to any writing day, to fall into an entirely different focus and method of being creative. And since we’re going for the ultimate ideal here, on this day, I have the time to watch “Jeopardy,” and every category is a variation on “American Writers” and I knock my way through the whole board, getting every single answer before Alex even reads the whole clue. 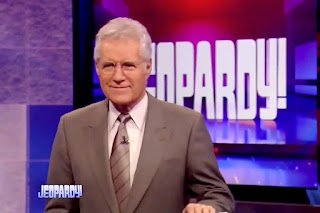 Where does a story begin for you?
I love writing short stories because they might be sparked by anything—something I’ve observed while riding the Metro into DC, or a sentence rattling in my brain. I think long and hard before diving into writing a novel, and do a lot of research, but I’ll leap into a story on about any whim. This book of stories was something a little different, though, because I gave myself a general writing assignment, which was that each story had to contain one hard, true thing from my personal experience of losing my first husband to a heart attack when I was 35. Even so, there was a lot of freedom within those parameters, so stories emerged from particular memories, remembered dialogue, feelings I had as I grieved, moments of anger, and so on.

What’s the best phrase, line, or passage you’ve had to cut from a story?
I once wrote a long and luscious description of a divey taco restaurant I loved back when I was growing up in Iowa. I’d ride the bus downtown and my friends and I headed to Taco Grande for these incredible things called “sanchos” that were sort of like a steamed burrito, except 1000 times better, made by slipping paper-wrapped burritos into a special steamer drawer. I’ve never seen sanchos served anywhere else, and it’s possible that Taco Grande invented this dish and it has nothing to do with Mexican or even Tex-Mex cuisine. Anyway, after inventing a ludicrous reason to get my characters into an imaginary-yet-so-real-to-me Taco Grande and writing several mouth-watering pages describing the sanchos, and finally maneuvering my characters to the counter to order and returning them to the table with their plastic orange trays, they could at long last EAT the sanchos. But here I rabbit-holed into many sentences to describe the exact nature of shredded iceberg lettuce after the steamer drawer, and many more sentences about the vinegary hot sauce, and on and on—and six pages later I was crafting paragraphs of the characters talking about how incredible the sanchos were…well, I finally realized this scene was utterly irrelevant to the story and I killed that darling. It was such a heartbreaking moment and I think that’s why I haven’t steered anyone else back into Taco Grande.
Posted by The Story Prize at 7:00 AM