Beth Bosworth: A Shed of Her Own

In the 55th in a series of posts on 2012 short story collections entered for The Story Prize, Beth Bosworth, author of The Source of Life (University of Pittsburgh Press), talks about where she writes and writing she admires. 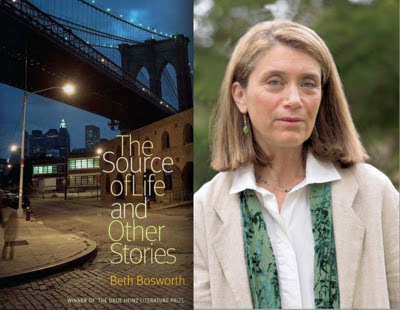 What made you want to become a writer?
In 1976 I was studying with Allan Gurganus at Stanford University and he had invited Grace Paley to read.  I thought she was her narrating character, Faith. (She wasn’t.) Afterwards as I recall he said, “Hello, Grace,” and leaned down to kiss her cheek. I’d never seen people more glamorous in my life. That’s one answer to the question.

Where do you find inspiration?
I read and reread really good prose, from Walter Benjamin’s Berlin Childhood to Dashiell Hammet’s The Thin Man. Inspiration is linked, for me, to notions of comfort or nurture; I’ll go back to Virginia Woolf and Shakespeare to learn about being human.

What obstacles have you encountered in your work?
Sometimes I badly want an idea to take form, flesh, and I can waste a lot of time not accepting that just isn’t happening. All sorts of material does eventually get recycled, but that’s different.

What's the shortest time it has taken you to write a story?
On rare occasion, I’ve sat down to write the whole in the space of a morning. Generally a first draft can take a week. I know if a story is healthy or true to its own terms if I can envision getting up in a roomful of people and reading it aloud.

What's the longest time it has taken you to write a story?
I revise constantly and some of my stories take a long time to gel—years. My sense of how a story ends has changed over time, too. Some ideas end up in short-shorts.

How often does an idea for a story occur to you?
This past summer, while I was working on the final draft of The Source of Life and Other Stories, no new ideas came. I’m often plagued by a sense of fraud—“I’m not really a writer” or “It’s all over”—and I’m relieved to say that ideas have begun to pop in the last week or so. Generally speaking, reading can set off the idea mechanism, as can the return of sunlight in spring.

What is the worst idea for a story you've ever had?
The worst idea I've ever had is for a story about how imbibing water from Brooklyn’s polluted Gowanus Canal causes the women on a certain block to grow noticeably taller. What’s worse is that I go back to the idea from time to time.

Where do you do most of your work?
I do most of my work in the quietest, most private spaces possible. Perhaps because my work is less autobiographical than it was, I can now write, if necessary, in a room with other people present, if I wear headphones. In Vermont I’ve had two windows enlarged in a ready-made, internet-free garden shed; in NYC I sneak away to locations undisclosed. Writing colonies have also proven immeasurably useful, not so much for what I’ve written there as for the hard resolve, a kind of revolutionary resolve once I’ve returned to my life that each and every one of us deserves Quiet Hours until four p.m daily.…and lunchboxes filled with cookies and carrot sticks.

What writers have you learned the most from?
The other day a poet I know looked around at the various obligations he had for this season, including reading his poems, teaching, writing recommendations, traveling, writing new poems, and he said quietly, “I’m just going to have to declare this a success.” Every day now, I look around and declare “this” a success. I think I might have three short story collections in me, the way Grace Paley did. I love the taut prose of certain novelists and story writers; Kafka, Doctorow, others. I loved Junot Díaz’s The Brief and Wondrous Life of Oscar Wao for its exuberance, its breadth, its access to fantasy. I note the humility that accompanies some narratives—the reaching out to other people. I had a student once who said Hamlet was about how language connects the mind to the world. Like I said, I go back to Virginia Woolf’s Moments of Being or A Room of One’s Own for refueling. I feel like I know that guy Shakespeare, the way many of us do, I’m sure (ha). The writer Jane Avrich once said that if you push tragedy a little farther, it becomes comedy. That seems central, and I am so humbled and honored when someone finds something I’ve written funny. I recently read Téa Obreht’s The Tiger’s Wife and was reminded how some great tales take a while to spin. I think we’re always learning from writers and their texts.

What story by another writer do you wish you'd written?
Heinrich von Kleist’s story, “The Earthquake in Chile,” is a miraculous piece of writing. But do I wish I’d written it? Naah…. Occasionally you do read a story or novel and think, “I guess there’s no need to try something like that now, huh.” I felt that way years ago when I read A. S. Byatt’s Possession,  partly because she could actually pull off the Victorian poetry. Wow.
Posted by The Story Prize at 8:00 PM