Ron Hansen and the Legion of Bad Ideas

In the 53rd in a series of posts on 2012 short story collections entered for The Story Prize, Ron Hansen, author of She Loves Me Not (Scribner), shares some of his favorite stories. 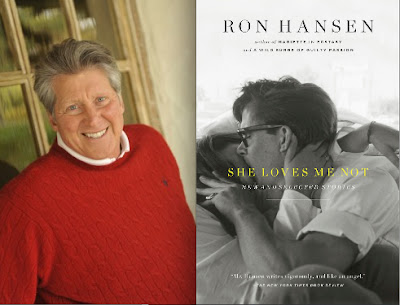 What made you become a writer?

I have written elsewhere that when I was in kindergarten I was the narrator for a Christmas pageant and recited from memory the nativity story from the gospel of Luke.  I stood there in front of a hundred people, mostly parents, and watched them pay strict and serious attention to what I was saying, even though words and phrases like "manger" and "swaddling clothes" and "the time of her confinement" were like gobbledygook, an absolute mystery to me.  The power of language took root in me, and over the years I realized that storytelling, at least on paper, was something I enjoyed doing enough that I did it voluntarily. In high school I discovered John Updike's work and read everything of his that I could.  Even though I then aspired to be exactly like him, one's own personality comes out even in imitation and few would find many likenesses in our fiction, though I have followed his lead in writing essays and book reviews—mind you, they're not remotely as good.

What's the shortest and longest time it's taken you to write a story?
Some come so quickly that I have little memory of writing them. My children's book, "The Shadowmaker," took only three hours in first draft. The first-person stories "My Kid's Dog" and "My Communist" and "She Loves Me Not" each took less than a week. But speaking of "My Communist":  the idea for that came from a Polish priest's homily in California in 1981. The gossip was that the pope had sent him away from Poland because he was on a KGB hit list for those priests involved in the Solidarity movement. In his homily, the priest said he was spied on by a man in a trenchcoat for several weeks and wanted to speak to him because he would surely know Polish, but then the man stopped following him and the priest was surprised by his feelings of loneliness. I knew immediately, in 1981, that it was the basis for a good short story, but it took me more than twenty years to get around to it.

The necessary added ingredient came in the form of a newsletter that carried a Polish priest's narrative of his journey to Alaska to serve a parish. He'd asked the editor to correct his English, but the editor found his grammatical mistakes charming, and that voice was what precisely what I'd been missing for twenty years. "My Kid's Dog" was a true story that my late father-in-law related to my wife some thirty years after the events it describes. It just hung around in my head for a while, and then I knuckled down and finished it rather quickly. Same with "Wilde in Omaha." I discovered Oscar had visited my hometown in the course of writing a research paper on an entirely different subject when I was probably 21. Many, many years later I remembered a reporter's rather snide version of Oscar Wilde's day in Omaha and I finally thought it was time for me to write my own account. The gestation period can be very long. The blizzard of 1975 in Nebraska greatly influenced my writing about the famous blizzard of 1888 in "Wickedness," but that story was the last one I wrote for my first collection of stories, Nebraska, which was published in 1989. So again, more than a dozen years passed before the inkling got down on paper.

What's the worst idea for a story you've ever had?
My bad ideas are legion, and I generally just tuck away the finished products in a garage file in the hope that I'll someday figure out how to solve their myriad problems. But one story comes to mind: It took place on Old McDonald's farm (of the children's song) among the talking sheep and cows and chickens who were involved in what resembled a contentious town meeting. At last Old McDonald descended into their midst like a deus ex machina and yelled, "Stop these shenanigans!" I got some chuckles myself in rapidly writing it down, but it really was a ludicrous idea. Sometimes you just have to get these things out of your system.

What stories by other writer do you most wish you'd written?
In no particular order:

"Mars Attacks" by Jim Shepard.
"Notes for a Story" by Gail Godwin.
"Master and Man" by Leo Tolstoy.
"Redemption" by John Gardner.
"The Things They Carried" by Tim O'Brien.
"Everything That Rises Must Converge" by Flannery O'Connor.
"Pigeon Feathers" by John Updike.
"In the Heart of the Heart of the Country" by William H. Gass.
"Spring in Fialta" by Vladimir Nabokov.
"Big Two-Hearted River" by Ernest Hemingway.
"Absolution" by F. Scott Fitzgerald.
"How I Contemplated the World from the Detroit House of Corrections . . ." by Joyce Carol Oates.  (She also edited an anthology titled Scenes from American Life and almost everything in it is something I wish I'd done.)

And already I feel guilt over the many great stories and writers I've left out:  John Cheever, Edna O'Brien, Jean Stafford, Alice Munro. . . the list threatens to be endless.
Posted by The Story Prize at 8:00 PM