David Ebenbach Doesn't Have the Answers

In the 54th in a series of posts on 2012 short story collections entered for The Story Prize, David Ebenbach, author of Into the Wilderness (Washington Writers' Publishing House), discusses how writing each story is like starting all over again. 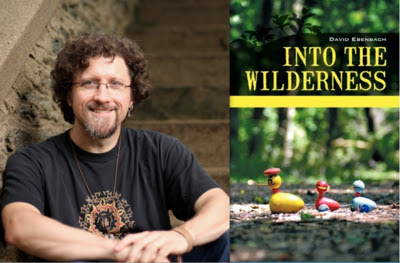 Sometimes I get envious. I’m not even talking about the usual kind of envy we direct toward our fellow writers and their successes; I’m talking about the envy I feel toward people who are doing other things with their lives—being doctors, collecting the trash, running guns across the border illegally, working the stock market, whatever it is. I envy those people because I sometimes get the feeling, right or wrong, that, after a few years on the job, they probably basically know what they’re doing. They know the safest routes across the border, the easiest way to get an appendix out. They know how the trash compactor in the garbage truck works and that they’ve got to buy low and sell high. Whereas I’ve been writing fiction since I was eight years old, have been writing short stories seriously for more than fifteen years, have published two books of short fiction, in fact, and have almost finished a third, and I’m pretty sure I still have no idea what I’m doing.

What I mean, really, is that I still don’t know what it takes to write a short story. Because, on the one hand, there’s one story of mine—“Jewish Day,” from my new collection, Into the Wilderness—that took me eight years to write, with drafts abandoned and radically revised and revived, and time away from the thing altogether, and so on; and on the other hand there’s another piece in that same collection—“Counterfactual”—which basically took me one morning to write, all in a burst. And I like them both equally; they might be my favorite ones in the book.

So: How long does it take to write a story? I don’t know; it depends. And that’s not the only thing I don’t understand; consider the Judith stories; there are four of them in Into the Wilderness, all about the same character—but I started out thinking that her story was going to be a novel. It wasn’t until I’d finished the novel and gotten some honest feedback that I realized that most of the book was sort of crazy but that actually I had, amidst the craziness, some promising connected short stories in there. So, clearly I’m confused about the form that work should take. There have even been stories that were no good until I turned them into poems, or vice versa. Or consider point of view, or setting, or verb tense, or anything else; not infrequently I start the first draft out with one set of choices and it doesn’t end up working until I make other choices. I mean, I’m flailing out here.

Of course, the really ridiculous thing about all this is that I’m also a teacher. I’m constantly going into the classroom to answer student questions: How long should a story be? How much description do I need? Isn’t present tense a bad choice? How much revision does it take? These people are counting on me for answers, and I don’t have them—or at least I don’t have them in the abstract. That’s why so many creative writing classrooms operate through the format of the workshop: Instead of making general pronouncements about the nature of fiction, we look at specific things the students have written and we try to figure out what that particular piece needs. Maybe it’s almost done, and maybe it needs a whole lot more work. Maybe the story would be better if it was told from a different character’s point of view, or maybe it should be focusing on a different moment in the character’s life. Maybe it needs to be twice as long, or maybe half as long. We don’t know until we get to know that story.

Like it or not, it seems to me that this writing thing—maybe it’s actually the same in the stock market or the garbage truck; I don’t know that, either—but writing fiction, anyway, is not about coming to understand fiction, or at least not in any kind of definitive and permanent way. It’s about writing a particular story, and looking directly and intently at that one particular thing, and coming to understand what it is you have to do, this time, to get it right. Honestly, it’s more like parenting than anything; these things we write are almost as alive as our children, it turns out, and there is no singular wisdom that will help us make all of them grow up right. There is only the wisdom reminding us that we need to figure out how to do it over and over again, every single time.
Posted by The Story Prize at 8:00 AM