In the 65th in a series of posts on 2012 short story collections entered for The Story Prize, Charles Yu, author of Sorry Please Thank You (Pantheon), talks about trying to push himself outside of his comfort zone and how his ideas germinate. 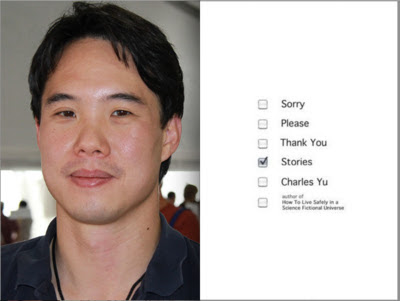 What obstacles have you encountered in your work, and what have you done to overcome them?
I struggle with sameness of voice, sameness of outlook for my narrators. I have experimented with a fairly wide variety of forms, but in terms of tone and general worldview of my characters, I have not taken as many chances as I would like to have taken, and that is something I am looking to change. Writing from the same philosophical or psychological point of view all the time can get boring, and it limits the kinds of stories I can tell. The problem, of course, is that it’s natural to go to what you know, to go to what you are. So what I am doing now is imposing constraints on myself. Not censoring or pre-editing my ideas, but deliberately, actively trying to do things that don’t feel natural, steering away from what I am comfortable with and straight toward what I am most of afraid of—sort of writing with the weak side of my imagination. I’m trying to write with my brain’s left hand.

What’s the shortest time it has taken you to write a story?
If we’re talking about a story that has made it out into the world, then probably about two weeks. A relatively short story – less than 2,500 words, I think. And the revising process took place over longer. But that was one of those rare occasions when a lot of the story came out in a rush, and that rush ended up being decent enough, close enough to what I was trying to say, that even after revision a lot of the kernel of the first draft was still preserved in the final version.

What’s the longest time it has take you to write a story?
That remains to be seen—there are stories that have been in the laboratory for years now, stories that have cycled between the lab and the landfill, parts falling off, new parts being grafted on, stripped down to their skeletons and rebuilt from the inside out. They’re like my cyborgs, part organic, part synthetic, part breathing and blood-filled, part designed and engineered, and they live in this kind of active ecosystem, a very harsh environment where they are in competition with the other lifeforms. They are competitive for resources, trying to eat up the ideas around them, to expand their territory within the space. And they are cannibalistic, eating others if they need to. All of which is to say, I may have a story that will end up taking years to write—I have an idea that I have been messing around with for four years now, and I can’t imagine how it would ever turn into a story, but I’m not giving up on it. And sometimes these proto-stories, even if they don’t make it out themselves, they have offspring, they give birth to other stories, baby-stories, that do make it out.

What’s the worst idea for a story you’ve ever had?
Oh there are too many to count. That’s like a hundred-way tie. The truly bad ones I can’t even really remember, because I’ve blocked them out. Extremely awful ideas of mine tend to be conceptual, premise-driven, meta- to the point of breaking the fourth-wall, overly clever without any real story in there, intricate without any point to the complexity, and generally just not very well thought out. 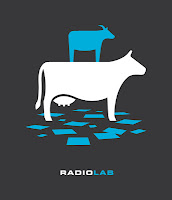 I do most of my writing in one of two places, either in a chair in my living room, or at a table in my kitchen. Although if I’m being precise, that’s where most of my typing gets done. Most of my thinking gets done unconsciously, in the shower, or in the car listening to Radiolab or music or the news, or right before I fall asleep, or pulling into the parking lot at work. Transitional moments, for some reason, are when I do my best thinking, a moment here, a half-second there, a sudden flash of something that I try to hold onto long enough to capture it in my lab.
Posted by The Story Prize at 5:24 PM