In the 60th in a series of posts on 2012 short story collections entered for The Story Prize, Chad Simpson, author of Tell Everyone I Said Hi (University of Iowa), tells how reading a single story changed his life. 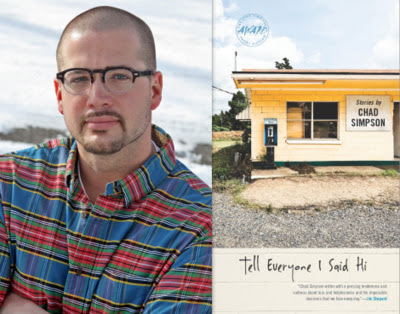 I had decided in October that I’d made a mistake, that I missed baseball.

This, after I’d turned down a handful of scholarships earlier that year, disappointed I hadn’t been drafted. This, after I’d told myself I was done with the sport forever.

From my dorm room in Peoria, Illinois, I called the coach at a community college in Kansas—Garden City, home of the Garden City Community College Broncbusters—and asked if he’d have me. Then I called a guy I knew from high school back in Indiana, T., who was a sophomore at GCCC, the centerfielder.

As things turned out, T. needed a roommate for spring semester. About a week after Christmas, I filled two black garbage bags with my stuff, and T. picked me up at my girlfriend’s house in Logansport on a cold January morning.

Garden City ended up being this mostly treeless place with unrelenting winds. In the way station that was community college athletics, as a part of its machinery, I quickly realized that I liked the things baseball did for me more than I enjoyed actually playing the game. By the end of January, I was ready to be done with it all over again. I was ready to go home.

I suppose I was having an identity crisis, though I wouldn’t have called it that at the time. I had a bedroom in the apartment I shared with T., but for some reason I slept on the couch the entire five months I lived there.

For the previous two or three years, I’d filled a notebook with bad poems, and not long after I arrived in Kansas, I began visiting the library. At one point, I checked out a novel each by Hemingway and Faulkner, The Sun Also Rises and The Sound and the Fury. I knew nothing about the books or their authors, but I read from them each night before I fell asleep on that ratty couch, and something clicked. I decided I wanted to be a writer.

T. had a subscription to GQ or Details, I can’t remember which, and one afternoon when our double-header was rained out, I was flipping through it and came across an author profile. The writer’s name was Michael Chabon. His second novel, Wonder Boys, had just come out, and the profile mentioned a sentence of his from his story collection, A Model World and Other Stories, as proof of Chabon’s unique way of viewing the world: “It was a frigid May morning at the end of a freak cold snap that killed all the daffodils on the lawns of the churches of Pittsburgh.” 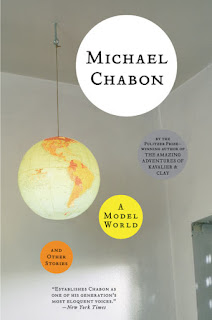 I was slain by those dead daffodils on the church lawns. Later that afternoon, at Hastings, where T. and I rented a lot of movies, I browsed the books and found Chabon’s story collection and purchased it. Later that night, after T. and his girlfriend had quieted down in his bedroom, I read my first short story as an adult, “S Angel.”

I have just reread that story for the first time in almost eighteen years, and it’s hard for me to imagine what I would have thought of it back then. The story itself is simple enough: A young man, Ira, attends his cousin’s wedding and reception in California. There are references to Italian wool trousers, to salmon carpaccio with lemon cucumber and cilantro. There are glancing references to Judaism. There are at this wedding a lot of rich people.

I had grown up in two small towns that each held a hog slaughterhouse. At the time, I don’t think I’d ever met anyone who was actually wealthy. I’d known only a single Jewish person.

But there was language in that story that I’m sure I was drawn to: a “delta of hair” Ira shaved between his eyebrows before attending the wedding, “wadded florets of Kleenex” submerged in one character’s purse.

And there was something else. Ira, who is a little lost in his life, isn’t so sure his cousin who has just gotten married looks happy. He spends much of the story pining for a woman, Carmen, who eventually leaves the reception with another man.

The reader knows, too, that there was a moment in the recent past at which Ira had been attracted to his cousin but that he had not pursued it. So he longs not just for some direction in his life, and for Carmen, but, possibly, for his cousin as well.

I think I would have understood at the time Ira’s longing.

At the end of the story, Ira finds his cousin after she has wandered off from the reception, and the two talk for a second and then kiss and then bam, the story is over.

Even now, it’s mysterious. I don’t know exactly what’s going on. There is a taboo thing taking place, but it’s subtle. It comes out of confusion, out of longing.

At eighteen, I was hooked. I read that first story two more times that night, taking it all in, trying to figure it out. I’ve been reading short stories with the same kind of awe and dedication ever since.
Posted by The Story Prize at 8:00 AM