Matt Mullins Steps Out of Himself

In the 64th in a series of posts on 2012 short story collections entered for The Story Prize, Matt Mullins, author of Three Ways of the Saw (Atticus Books), contrasts the writing process with playing in a jam band. 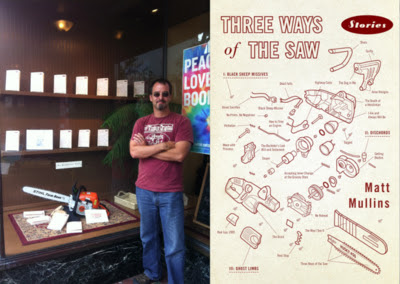 I write for the same reasons I’ve played guitar in improv or “jam” bands for so many years: to get inside that imaginative place where all invention and spontaneity seem to exist. When I’m creating anything compelling to me, my mind enters that place and my ego dissolves and I become another world. With music, the world swirls in bending strings and pulsing drumbeats made by fellow travelers, and it goes where it will go, sometimes with guideposts we’ve agreed upon beforehand. With writing, the world is filled with characters saying and doing, conceits, structures, dead ends, surprise turns, slow realizations, and sudden illuminations, as well as the shape of every single letter and word and the sounds they make alone and in their various combinations.

I’m not sure why I like to go to this place so much. Why I’ve always wanted to step outside of me. On the simplest level, I want to because it’s a really fun place to go. Anything can happen, and even on those days when you can’t quite make it or when you come back to face the consequences of traveling there, there’s no physical danger in the going. And you usually learn something about your craft, if not yourself, in the process. If I want to get psycho-analytical about it, I could say maybe I like to go there because I’m running away from (and looking for) myself and what I mean at the same time, but such an idea doesn’t hold all of what I experience while I’m there. Because I also like the challenge of trying to pull a good story from that imaginative place and bringing it back to share. There’s both brass and humility wrapped up in that.

The best thing about jamming with friends is that we are all part of it, all part of the experience of that moment because we are all plugged into it and going to that place together. The transference is communal, visceral and immediate, regardless of if you’re listening or playing. The writer has to go it alone and plug other people in after the fact. The writer has to take the story from that imaginative place and keep it alive on the page so the reader can enter later through the words. This creates the essential difference between what happens in the moment and what you bring back and revise (or not):  the improv jam versus the multi-tracked recording, those characters and scenes and situations as they unfold inside your mind versus what you write down then versus what you craft later.

While playing, all the musicians can hear the song at once, but the reader can’t be inside the writer’s head during the writing, so there isn’t collaboration or collective influence in the now. But if the writing truly connects to that imaginative place, the reader will be as close as possible to the moment as they read. There will be a transference. And it’s the power of this transference of empathy or sympathy or dissonance or harmony from an imaginative place that speaks to us (one in a primal way without words, and the other inside the mind’s ability to conceptualize abstractions and create an imaginary reality through symbols) that I’m talking about here—the universal connections that people, who are physically disconnected from each other by our very nature, feel from this transference, which is part of why our need for it is universal and nearly as old as imagination itself and has existed within art and storytelling since their beginnings. When someone truly accomplishes that transference, you feel it in a profound way. And then you think about what you just felt. Which is exactly what the imaginative place at the core of art is about, at least for me: creating and expressing artifacts that speak to the truths behind what we think and do and feel.
Posted by The Story Prize at 3:31 PM