Roshi Fernando and the Touch of Place

In the 59th in a series of posts on 2012 short story collections entered for The Story Prize, Roshi Fernando, author of Homesick (Alfred A. Knopf), discusses definition of herself by herself and others. 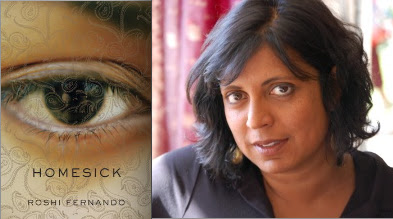 Since the publication of Homesick, I have been haunted by the specter of definition. Who are you?  What are you? Homesick itself has been defined—as diasporic literature, as “Sri Lankan” (I am a “Sri Lankan author” apparently) (I was born in Paddington, London, of Sri Lankan parents) – as a novel, as interlinked short stories. I have been asked to define myself, and my stories, and I have defined and redefined, adapting to who is asking the question.

My work has been freighted by the reader’s perception of what it should be. In writing about the immigrant experience, I am writing about the experience of the outsider, and everybody has had the experience of the outsider at some point in their life. Therefore, the reader assumes that my characters’ outsider status is my outsider status. The color of my skin has radicalized my work, and although I was and am clearly sitting on a fence well outside the arena, observing in a measured manner, I am still somehow dragged into the stories themselves. I am there, the creator and procreator of these characters.  In this world of celebrity, people want to know that the stories are autobiographical—they want to know that when reading the work they are reading a little piece of you. And of course, they are. But they are also reading the many books I read which trained me, the people I met, the places I’ve been, the husband I have loved for many a year, the children I have nurtured.

It is not only my personal definition that has been tasked and trammelled but also the form with which I wrote. And this is where we get to the meat of things: Many who have read Homesick would not have necessarily reached for a book of short stories. People in Britain are dedicated novel readers, and often I have been accused of challenging a reader down a route that points them, in their opinion, in a direction they didn’t necessarily want to go. The Amazon reviews (never read the Amazon reviews!) suggest that in using the short story, I have somehow limited the enjoyment of the piece. I find this the most interesting of reactions. Short stories were the only way to write Homesick; I thought what I was doing was democratizing the telling of the story. I was gathering a community of people, and showing individuals becoming more unique and apart from their origin. The stories and their individual themes also reflected the multi-cultural place London became during the years I was writing about, so that eventually, the stories disjunct: Their individuality defines the collection. Only the short story could reflect the complexity of what I wanted to do with my work. I wanted to show individuals changing, I wanted to show a country changing, I wanted to show the world changing. How best to do this? With the universality that is the human experience—the tiny moments of a broken bird’s wing, a snatched kiss, the singing of a song at a cricket match, a slip-over at a dance, the counting down to a new year.

As I write this, I have no clearer understanding of how to define myself or my work. I think I wrote short stories that came out satisfactorily. You see, in being required to define myself, I have lost myself.  I am puzzled still as to this urgent requirement for definition. But in asking “why define?” rather than scrabbling to give answers, I think I have stumbled on the reasons why people ask me for definition. They ask because what made sense to me when I wrote the book, has touched them as making sense too, and what they want to know is: Do you really mean it? Are we all the same? Are we all a story that makes up a larger whole? And are our moments of rejection and sadness, of joy and laughter, the same as yours?

So many good writers—Orhan Pamuk, Alice Munro, William Trevor, Annie Proulx—have a sense of place and clearly define that place continually throughout their oeuvre. When composing this collection, I wanted the music of my place to sing through. But that meant defining what that place was. South London? Colombo? The place became somewhere inside of me. Once, one of my children, aged four, was woken suddenly at the end of a car journey. She cried loudly, as if bereft. I scooped her, comforted her, asked her why? “I was having a lovely dream,” she said. “Can you remember it?” I asked. “No,” she whimpered, “not a touch of it.” It is so beautiful, the thought of that lack of a touch. In each of the stories, you will find somewhere, a touch of the place I was defining. A place I was homesick for.
Posted by The Story Prize at 8:00 AM