In the 63rd in a series of posts on 2012 short story collections entered for The Story Prize, Valerie Fioravanti, author of Garbage Night at the Opera (BkMk Press), relates a valuable lesson. 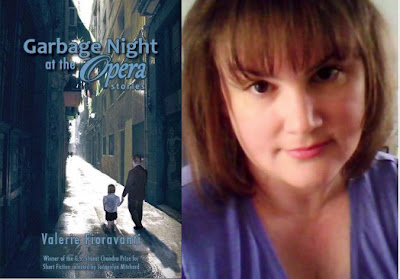 What’s the longest time it has taken you to write a story?
I began a couple of the stories included in Garbage Night at the Opera before I entered my MFA program in 2001, although the final versions are wildly different than those early drafts. Right now, I’m finishing up a second story collection, and I’ve been joking that once I’m finished, I promise to be faithful to my current novel project, Bel Casino, which continues the story of Franca and Lina from Garbage Night at the Opera as they reunite in Italy.

Chances are, I’ll cheat. I’ll want the more immediate gratification short fiction provides, or an essay topic I’ve been contemplating for years will finally coalesce. My writing process doesn’t appear to be naturally quick or monogamous. I need simmer time, and the most productive way through this seems to be to work on multiple projects concurrently. This makes it difficult to talk about how long I worked on something. It could be (if fortune shines upon me) that my second and third books follow quickly, giving the appearance that I am prolific, when the truth is that my book-length projects have been chugging quietly along for years.

When I arrived in Las Cruces (New Mexico) for grad school, one of the first people I met was the writer Becky Hagenston, who had recently published her story collection A Gram of Mars. We were the same age, and our upcoming birthdays so close that she graciously shared her party with me. As we celebrated together, I couldn’t help but compare our writing lives: Her work had found a home, and mine seemed stalled in the land of promise. Becky gave a reading a few weeks later, and afterward a man came up to her and asked, “So, how long did it take to write that story—a month?”

Becky’s chin lifted as she declared, “I worked on that story for five years.”

That man snorted and walked away, but Becky became my hero that night. In her place, asked that question, I would have lied. At the time, I thought a story was something you tinkered with for a few months and then abandoned if you couldn’t get it right. Talent meant the work came easy, right? As I watched my new friend read, my own desires intruded upon my happiness for her. I couldn’t quiet my envy, which fixated upon Why isn’t that me?

Well, had I ever worked on a story for that long? Question asked and answered. It was time to shut up and get to work. Five years was a generous timeframe that allowed me to take my work more seriously without the pressure I was putting on my work to be immediately and exceptionally well done, and Becky’s unflinching declaration helped me reset the image I had of talent as something that bypassed, rather than embraced, hard work. Even though it occurred outside the classroom, it was the most valuable lesson from my MFA experience.

What writer or writers have you learned the most from?
Well, clearly I learned a lot from knowing Becky Hagenston as a person, but I admire “Midnight, Licorice, Shadow” from her second collection, Strange Weather. I’m interested in her sideways storytelling, how two characters naming a cat reveals so much about other aspects of their lives.

When I was working on my story “Earning Money All Her Own,” I returned to Tim O’Brien’s “The Things They Carried” because my story had a refrain of factory closings in the neighborhood, and I wanted those closings, which put more and more people out of work, to build power via repetition.

Richard Bausch’s “What Feels Like the World” is another story I read compulsively while writing the title story of my collection. The fate of the grandfather/granddaughter relationship at the core of the Bausch story had my heart in a vise the first time I read it, and I wanted that same quality for the father and daughter in “Garbage Night at the Opera.”
Posted by The Story Prize at 9:31 AM