In the 57th in a series of posts on 2012 short story collections entered for The Story Prize, George Singleton, author of Stray Decorum (Dzanc Books), discusses what made him a writer. 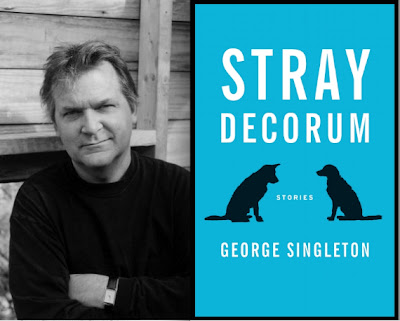 I understand well that it’s asylum-worthy in the South not to mention Faulkner or O’Connor as the omnipresent mentors to any wishful writer-to-be, but as a teenager I looked up to one scribe solely, the under-appreciated poet Henry Gibson, from Laugh-In fame. My parents owned a television set, and my town never supported a library that offered much more than a collection of  South Carolina histories, so it shouldn’t seem odd that, for me, Gibson preceded the southern masters. I did not confront Mr. Faulkner or Ms. O’Connor’s work head-on until just after college—along with Harry Crews and Barry Hannah—so for a while I could only imprint myself on a short, hair-combed-over, cheap version of Ogden Nash.

Understand that during the Laugh-In years I was a beginning distance runner more than anything else.  I got up at five in the morning and—not having a plausible coach, either—ruined my knees on a six mile course running at too fast a pace. These were dark, bat-ridden, scary mornings, and to fight the pain and hallucinations (how many spectral men and animals did I see roaming the nearby woods and fields?) I recited Henry Gibson poems, and tried to write my own. Here’s a typical Gibson:

I used to like fresh air
When it was there
And water—I enjoyed it.
Till we destroyed it
Each day the land’s diminished
I think I’m finished.

So I ran these goofball poems through my head, more or less, until I quit running at age eighteen when I A) got bored with running and B) tore some kind of ligament in my torso while doing that absurd “six-inches” exercise as ordered by my “coach,” had my personal doctor diagnosis it as gas, and then went off to college where the good track coach there wondered what the heck happened to me during the previous outdoor season and made the correct diagnosis as to why I could not run a mile without bending over as if undergoing appendicitis.

The college coach said, “We can get you an operation, or it’ll heal itself in a couple years.”

At least that’s how I remember things. I’m pretty sure I’m close to the exact chain of events. Anyway, I was then an ex-runner prone to waking at five in the morning. What’s there to do at five o’clock in the morning, in a dormitory setting, at a then-Baptist affiliated institution? I read my philosophy texts. I hid in the library in order to escape the predatory and persistent members of Campus Crusade for Christ. I scribbled down poems of my own that weren’t that much different from the Henry Gibson poems I had encountered six years earlier.

And then I discovered Ionesco and Beckett, which—impressionable boy that I was—turned me away from writing early morning poetry to early morning theater of the absurd. And then by my junior year, I came across Pynchon, Barth, and Barthelme, which caused me to turn from playwriting to prose.

That was thirty-three years ago. You would think that I’d rip a ligament in my wrist, or get carpal tunnel, get bored with writing altogether and take something up anew, that I could find something worthwhile to do with my time two hours before dawn besides either running or writing.

Like housebreaking. which, as I see it, isn’t that much different from sitting down to start a new short story. Who knows what hurdles and inconsistencies will arise once inside, what inimical characters lurk half-hidden, what unknown welter of fortune might—maybe—emerge.
Posted by The Story Prize at 8:00 PM