In the 49th in a series of posts on 2012 short story collections entered for The Story Prize, Peter Levine, author of The Appearance of a Hero (St. Martin’s Press), discusses story ideas he's gotten from other people and a story that didn't work out. 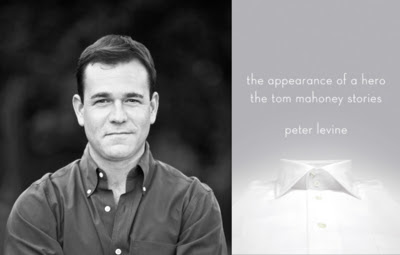 If you’ve ever written a story based on something another person told you would make a good story, what were the circumstances?

I’m the worst when it comes to this. From my book alone, there are at least 4 or 5 stories that grew out of, at least in part, stories that others told me. My dad told me a story about how he took my older sister camping with a bunch of his friends and their daughters. Late 1970s, the dads got stoned the whole time (of course, my dad says he abstained). Another story told to me was about a guy who was sleeping with his boss and how she was completely nuts, but how he loved her so much he couldn't see how loony she was.

My best friend Dan told me three stories. One was about a high school buddy of his who made up an older sister. All throughout their growing up, this kid—Brian, I'll call him—would talk about his older sister, Beth. She was much older and was always away at school: boarding school, then college, and then living somewhere else. She had an elaborate biography—what she majored in, what her job was later, etc. One time, in high school, a bunch of his friends were hanging out at Brian’s house and one of the friends brings up this older sister, Beth, within earshot of Brian’s parents, and they’re like “Who are you talking about?”

“Beth,” the friend says, thinking that maybe they didn’t hear him. But they had no clue what he was talking about, and Brian told them to shut up about the older sister. He’d just made up this sister—for years, making up stories about her! That became a story called “Our Hero David Katz,” but in that story, a guy makes up an older brother in order to fit in with the cool crowd. The other two stories Dan told me were about a friend of his who died in his early thirties and how he kind of always knew the guy—who was something of an idol—wasn’t long for the world. The other was about an older colleague of his whose father and mother were growing old and were nearing the end of their lives. The father, who had bad dementia, wrote his dying wife a letter about bringing their son—the colleague—home from the hospital. That became part of a story called “Havasu.”

As an aside, Dan often did me the favor of printing out many manuscripts on his computer at work. Another lawyer (he’s a lawyer) came in and, seeing my manuscript on his desk, asked him what it was.

What’s the worst idea for a story you’ve ever had?
I don't know about the worst idea, but the dumbest/strangest idea I’ve had for a story was about a guy who finds a stone outside his house and spends the entire day (and story) kicking it around town. The story was called “The Kicking Stone.” I had been reading too much Murakami and had also just watched the movie Hero, with Jet Li, which was a cool movie. The story shared the setting with the movie, though no one who would have read that story would have known it.

Anyhow, this guy goes around kicking this magical stone and encounters different people, and they tell him their stories and it’s supposed to lead up to something meaningful (what, I don’t know) —at the end, he swallows the stone. I actually put this before my graduate class and they didn't laugh at me, kind people they were, and then sent it out, never to be taken, though I was very fond of it then.
Posted by The Story Prize at 8:00 AM